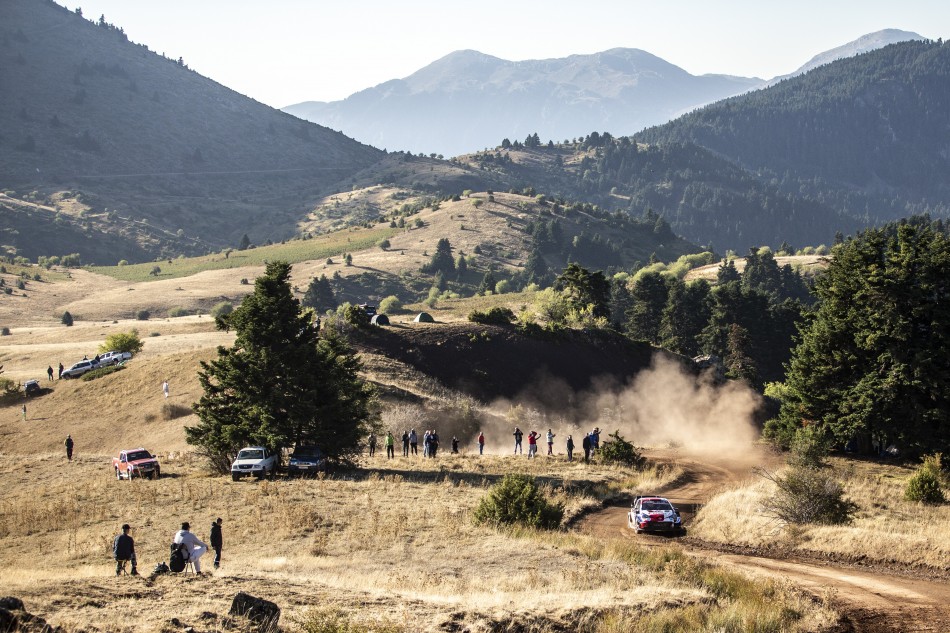 Kalle Rovanperä charged into a half-minute lead after a remarkable debut display at Acropolis Rally Greece on Saturday.

The 20-year-old, who scored his maiden FIA World Rally Championship victory in Estonia two months ago, was on course for his second after a blistering turn of speed on rocky mountain roads in central Greece.

Friday’s enthralling opening leg left Rovanperä, Ott Tänak and Sébastien Ogier blanketed by 3.9sec overnight. But the Finn won the first four of today’s six speed tests in the Fthiotida mountains south of Lamia to build a lead of almost 40sec in his Toyota Yaris.

He eased his pace slightly in this afternoon’s two repeat stages, in which the surface was rougher in places and polished in others, to end the longest day of this ninth round with a 30.8sec advantage over a duelling Tänak and Ogier.

Rovanperä, competing in Greece for the first time, was fortunate to escape when the rear of his Yaris slid into a ditch in the morning’s Bauxites stage.

“It was a huge moment, I was pushing a bit too much,” he smiled. “When we made some set-up changes to gain some protection in the afternoon’s rough sections we lost a little bit of traction. But we were wise and not doing anything stupid, it’s still a long way to the end of the rally.”

Tänak distanced Ogier with second fastest time in each of the first three tests, but slipped back into the Frenchman’s clutches with a lacklustre drive in the next.

The margin plunged to 2.5sec but set-up changes allied with softer compound Pirelli tyres enabled the Estonian to widen the gap to 9.4sec in his Hyundai i20.

Ogier was unconcerned. With nearest title rivals Elfyn Evans and Thierry Neuville still climbing the order after problems yesterday, the reigning champion knows a podium in his Yaris would further enhance his 38-point lead.

Dani Sordo was a lonely fourth in an i20. The Spaniard struggled to find a set-up with which he was comfortable and an error-free day placed him almost 90sec adrift of Ogier and nearly 70sec ahead of Adrien Fourmaux’s Ford Fiesta.

Fourmaux dropped time after nosing into a roadside barrier but the Frenchman stayed ahead of team-mate Gus Greensmith, who conceded a handful of seconds with a spin. The margin between the M-Sport Ford duo was 15.8sec.

Evans climbed from 16th to seventh in his Yaris after yesterday’s transmission troubles. The Welshman headed WRC2 leader Marco Bulacia, who overhauled Skoda Fabia team-mate Andreas Mikkelsen in the closing stage. They were separated by eight-tenths.

Neuville regained ground after yesterday’s power steering problems, climbing to 10th in his i20.

In FIA WRC3, Flying Frenchman Yohan Rossel made a stunning comeback to lead the class on Saturday night. Kajetan Kajetanowicz punched in a stage win on the final Eleftherohori blast and finished second. Chris Ingram is 15.4sec behind the Pole in third.

Sunday’s finale totals 69.25km west of Lamia. A double run through the legendary Tarzan sandwiches a single pass of Pyrgos, the longest test of the rally. The second run of Tarzan forms the Wolf Power Stage, with bonus points on offer in the drivers’ and manufacturers’ series.

The provisional results can be consulted here.