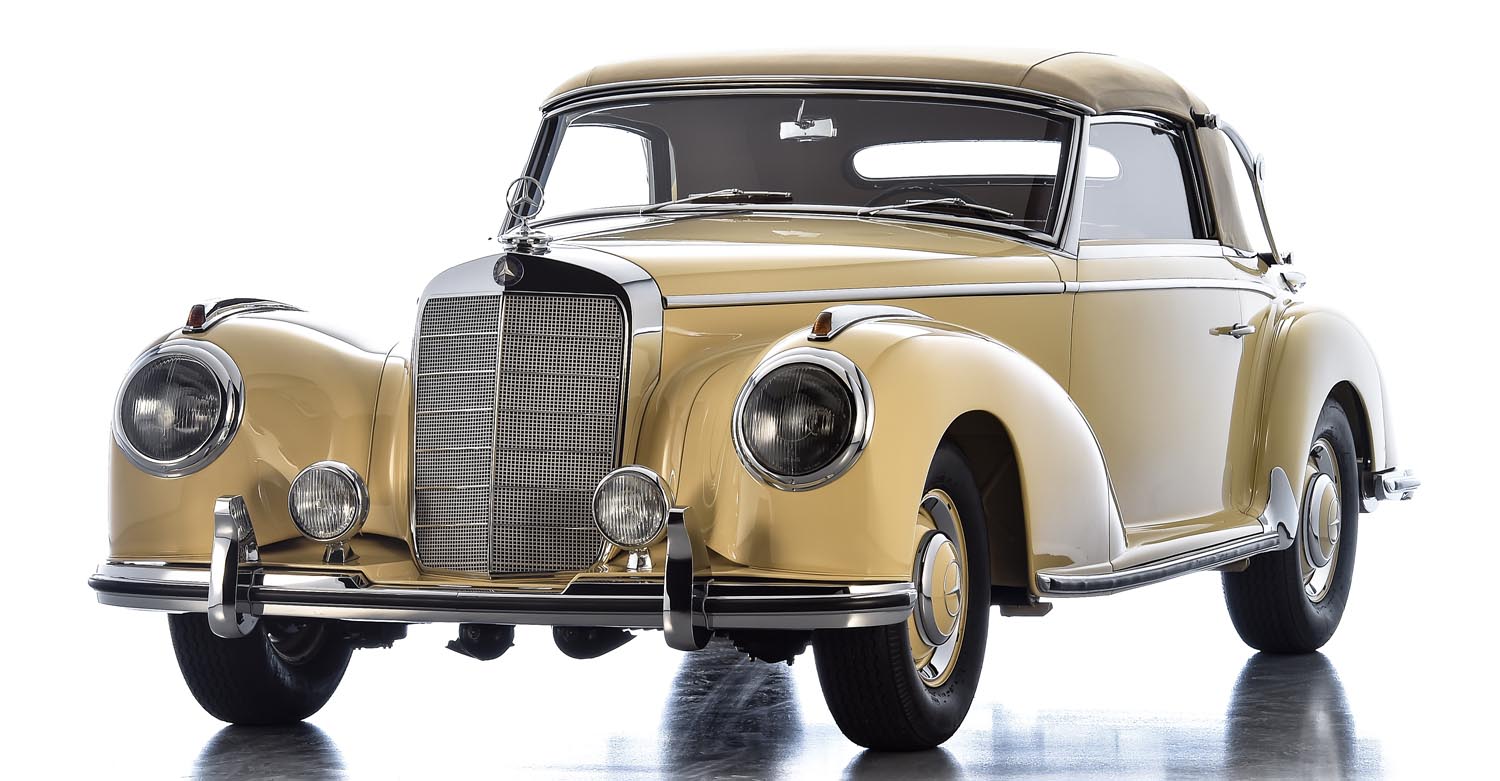 The Mercedes-Benz 300 S (W 188) was the star of the Mercedes-Benz stand at the Paris Motor Show from 4 to 14 October 1951. With this model, the Stuttgart brand surpassed the high benchmark it had set only in April of the same year with the prestigious Mercedes-Benz 300 (W 186) Saloon: the sales brochure described the Model 300 as a “car that makes dreams come true”. But at the autumn automotive event in Paris, the brand now presented two-door variants as luxuriously sporty vehicles that invited visitors to dream all the more.

The 300 S was available as a Cabriolet A, Coupé and Roadster. All three variants had a design that was the stuff of dreams: it combined elegance with sportiness – expressed for example by the elongated bonnet – a comparatively low roof line and a flowing rear end. The 300 S was produced by the special edition department at the Sindelfingen plant, and therefore handcrafted. The very best materials were used in the interior – fragrant leather, exotic wood, high-gloss metal. The result was not only a highly exquisite car, as each specimen was unique. Because as it had before the Second World War, the special edition department fulfilled practically any wish from its well-heeled clientele. So practically no two examples of the 300 S are identical. At the same time, this means that anyone driving a 300 S on the roads of this world is moving in the highest spheres of exclusive automobility.

The company was aware of the significance of the new model against the background of its own history of luxurious and sporty cars: “Daimler-Benz AG has always devoted particular attention and care to the models in the international luxury class. The Model 300 S was created for the circle of enthusiasts who have higher demands with respect to elegance, comfort, performance, speed and roadholding,” to quote the 1951 brochure on the 300 S.

Of the three body versions, the one shown at the stand in Paris was the Cabriolet A. There was also a Coupé in Paris, used as an exclusive demonstration car on the boulevards of the French capital. The Roadster that rounded off the fascinating model range was not yet shown at the 1951 show.

In 2021, the two exhibition vehicles from 70 years ago once again played a special role at Mercedes-Benz Classic: they were among no less than three 300 S whose owners had commissioned a manufacturerʼs appraisal. Such expert appraisals by Mercedes-Benz Classic are primarily carried out for owners of very high-quality passenger cars from the complete history of the brand. They are universally recognised documents of unrivalled significance on originality and authenticity.

A collector approached Mercedes-Benz Classic with two of these rare cars. The experts delved deeply into the vehicles and their individual histories. And after meticulously taking stock of technical components and consulting the documentation in the companyʼs own archives, plus extensive photographic research, they confirmed beyond any doubt that the collector has an extraordinary pair of vehicles, as they are precisely the two 300 S that featured at the world premiere in Paris in 1951 – the Cabriolet A from the exhibition stand and the Coupé that was used as an exclusive demonstration car. Both are pre-production models of the 300 S, and they therefore have an even more exalted status among the already rare specimens.

The third vehicle, which belongs to another collector, is hardly less exclusive: this 300 S Cabriolet A is also a pre-production model, as the experts from Mercedes-Benz Classic confirmed. It is the vehicle that was shown at the Mercedes-Benz stand at the Geneva Motor Show in March 1952.

Renewed lustre for the brand

The story of the 300 S began four years before its world premiere: “A vehicle that adds the golden touch to the name Mercedes-Benz again,” Dr Wilhelm Haspel, General Director of Daimler-Benz AG, postulated at a Board meeting in December 1947. A brave claim: the Second World War had only ended two years before. Fields of rubble could still be seen in many cities, institutions and businesses were struggling with shortages of materials and skilled workers, and worries clouded the everyday lives of many people.

At the same time, there was one view shared by many: to head back to normality and move forward. That was where the General Director was looking with his claim, and for Mercedes-Benz that meant regaining its position at the top of international automotive engineering. To put Haspelʼs foresight into context: in 1947 Mercedes-Benz was producing only the 170 V (W 136), which was still based on a pre-war design, and only in quite small numbers with a modest level of equipment. But at the end of 1947, the Board took some far-sighted decisions: it set the course for the top-of-the-range 300 and 300 S models, which were presented in 1951. The new models were indeed absolutely radiant highlights: highly exclusive, with impressive comfort, design and technology.

Whatʼs more, these features not only made the Mercedes-Benz 300 S desirable at the time. It is still a sought-after collectorʼs item. And a rare one at that: Just 560 specimens of the 300 S were built up to August 1955 (216 Coupés, 203 Cabriolet As and 141 Roadsters), including the pre-series models. Plus a further 200 specimens of the succeeding 300 Sc with fuel injection engine (98 Coupés, 49 Cabriolet As and 53 Roadsters). This means that a total of just 760 exclusive two-door models were produced. By comparison, exactly 1,400 Coupé versions of the 300 SL, which are also very popular amongst collectors, were produced from 1954 to 1957, and another 1,858 Roadsters until 1963.

Positioned in the top league

The sales price also confirmed the positioning of the 300 S at the top of the market. In 1951 it was the most expensive car produced in Germany, costing DM 34,500 and thus over DM 10,000 more than the Mercedes-Benz 300 Saloon car. The standard equipment was remarkably comprehensive, and included the following items: heating with fan on the right and left, direction indicators, two fog lamps, reversing light, padded fold-away occasional seat, a suitcase and a linen box. The 300 S remained by far the most expensive model even when the 300 SL Coupé (W 198) appeared in 1954: this came at a list price of DM 29,000. The situation was similar in 1957: in 1957 the 300 Sc was listed at DM 36,500. The 300 SL Roadster launched in the same year cost DM 32,500 – a considerable DM 4,000 less.

The league in which the 300 S played is also made clear in a letter to all company subsidiaries dated 4 October 1951, for the Paris Motor Show: “This vehicle is predestined to continue the tradition of our previous SS and 5.4-litre supercharged models as a particularly prestigious car with a sporty touch, and for the very highest demands in terms of roadholding and speed. The international press has already confirmed that this vehicle is particularly attractive in design, and that a happy synthesis has been found between the forms we are accustomed to for sporty vehicles and todayʼs sense of form.”

This is exactly how the vehicle was received. The King of Greece, Henry Ford II, Bing Crosby, Gary Cooper: these and numerous other crowned heads, business leaders and entertainment stars called a 300 S their own. One specific example of the modelʼs “heritage” is Dr Ignacio Barraquer, an internationally known specialist in ophthalmology: in 1938 he purchased a 540 K “Autobahn Courier” (W 29), an extremely rare body variant. In 1953 he chose a 300 S as its successor.

Both the 540 K and the 300 S were designed by Hermann Ahrens. From the 1930s to the 1950s, he was responsible for the design of numerous Mercedes-Benz cars, both passenger cars and commercial vehicles. He was not purely a “stylist”, as designers were called at the time, but also a body designer. Accordingly, he was also able to assess technical dependencies.

The technological development was carried out under the aegis of head of development Prof. Fritz Nallinger. The 300 S was largely based on the Model 300, but had a chassis with a 150 millimetre shorter wheelbase. The three-litre engine bore the designation M 188 because of numerous changes compared to the limousine engine. There, with two carburettors, it generated 85 kW (115 hp) at 4,600 rpm. In the 300 S, with higher compression, a “tuned” camshaft and three carburettors, this increased to 110 kW (150 hp) at 5,000 rpm. The increase in torque to 230 newton metres only set in at 3,800 rpm, instead of the 196 newton metres of the Model 300 at 2,500 rpm. The very considerable effort proved worthwhile: the top speed was 175 km/h.

Series production of the three variants commenced between June and September 1952. As an aside: the development department initially gave the 300 S the model series designation W 186/3 or W 186 Sport. It was only later that the two-door model was designated the internal designation W 188. In September 1955, at the International Motor Show (IAA) in Frankfurt/Main, the brand also presented the facelifted version of the exclusive two-door model, the 300 Sc, together with the 300 c Saloon. The most important changes concerned the rear axle and engine. The vehicles now had a single-joint swing axle with a low pivot point. The engine had dry sump lubrication, and the mixture was no longer formed via three carburettors, but instead by direct injection. Together with an increased compression ratio, this boosted the engine output to 129 kW (175 hp).

The bodywork also underwent changes: the 300 Sc had quarterlights in the side windows and larger indicator lights at the front and rear. Other distinguishing features were two horizontal air inlets with decorative chrome strips on both sides below the bonnet, and a slim, continuous trim element from the front to the rear wheel cut-out, including the door sill. The more powerful engine was indicated by the chrome lettering “EINSPRITZMOTOR” (injection engine) in the middle of the rear bumper. Production of the 300 Sc ended in April 1958.

The motoring press gushed with praise

The motoring magazine “Das Auto Motor und Sport” in Issue 21/1951: “Continuing the tradition that was once started with the 6-litre K-model, continued with the famous S- and SS-models and was last represented by the 540 K, the 300 S has now appeared at the Paris Motor Show as a comfortable touring sports car. And it is precisely this classification that is its special characteristic: speed, sportiness and driving safety combined with comfort, convenience and solidity.”

“Motor Revue” came to the following conclusions in its test report (Issue 4/1952): “The exterior impression is already imposing. The harmonious lines of the wide, low body exude performance and raciness, its classic Mercedes style nobility and prestige. The tradition-orientated form may be technically less up to date than a modern self-supporting body, but for a distinctly luxurious vehicle, this individualistic idiosyncrasy is perhaps more weighty than the possible gain in speed and fuel consumption. […] No less impressive is the luxurious interior of this car, which is optionally available as a convertible, coupé or roadster.”

The Berne-based “Automobil Revue” started its test report in Issue 54/1952 with a clear headline statement: “A new car for the worldʼs elite, combining supreme driving safety, refined luxury for two and the characteristics of a sporting thoroughbred.” And then continued: “Above all, the 300 S embodies a rarely or never before achieved synthesis between the requirements of a touring car and a sports car. […] Apart from the driving characteristics, it is not least the bodywork and equipment of the 300 S that make long journeys pure pleasure.” The same, always very critical and objective motoring magazine also mentioned one negative aspect: “One item on our wish list is glove compartment lighting, which is still lacking.” And ends its report with: “With the Mercedes-Benz 300 S, its manufacturer has once again climbed to the very highest ranks that international automotive engineering has to award.” 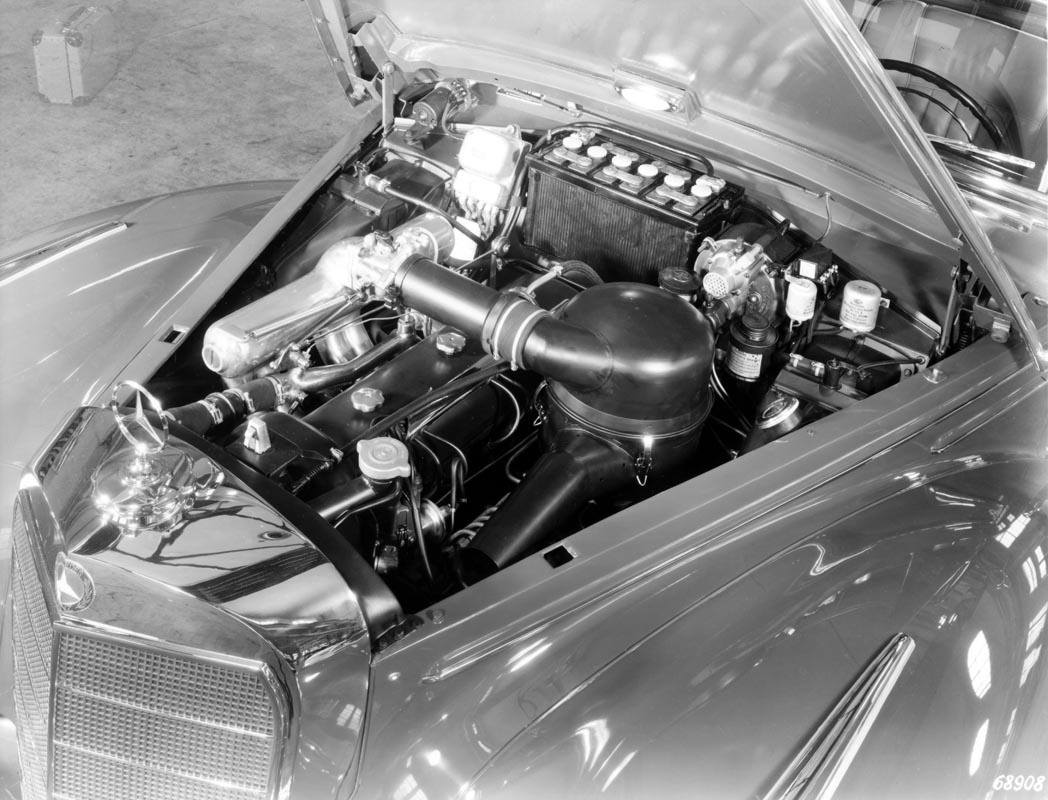 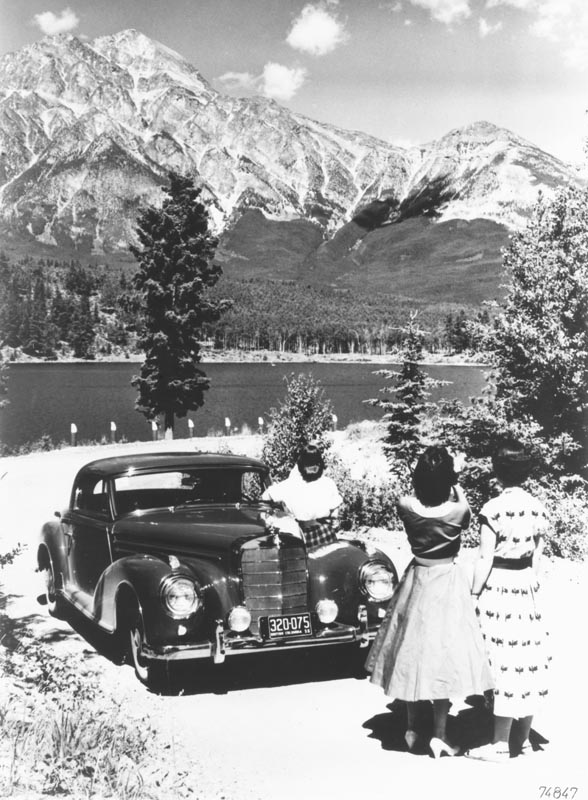 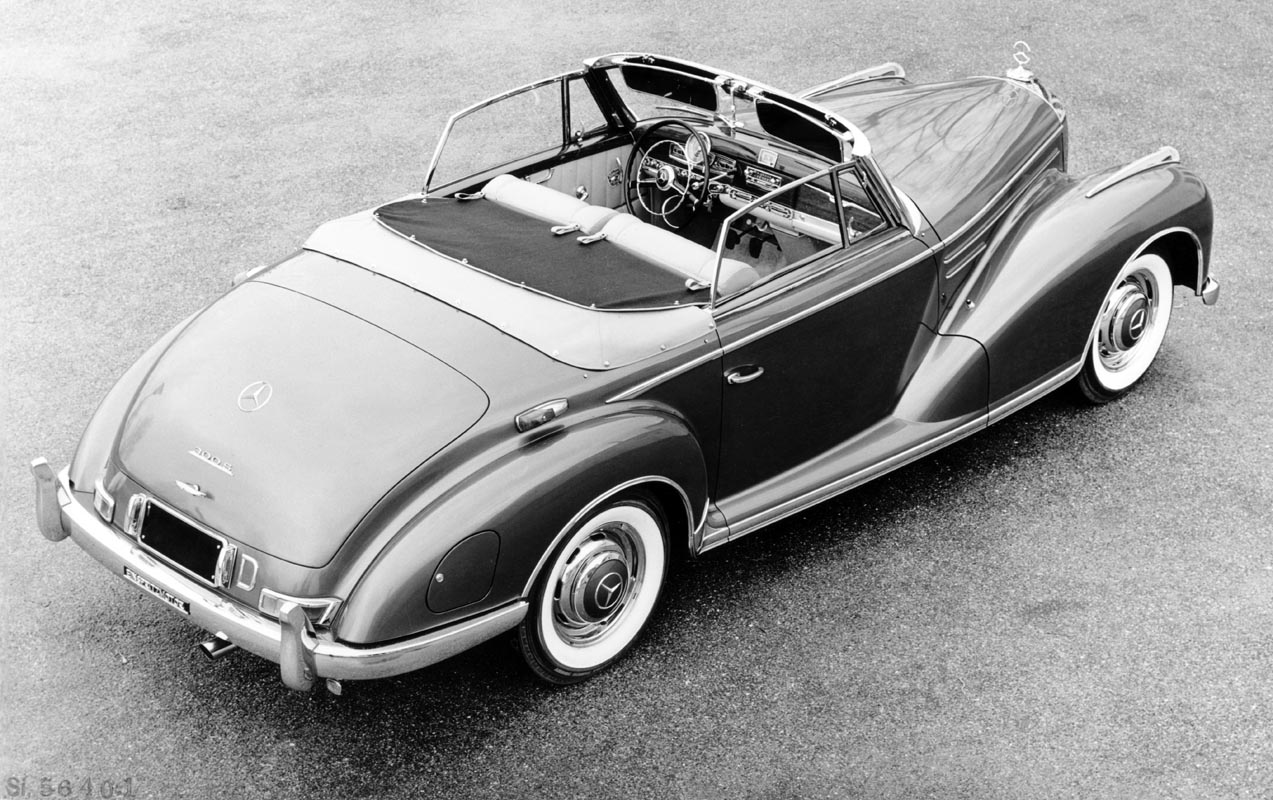 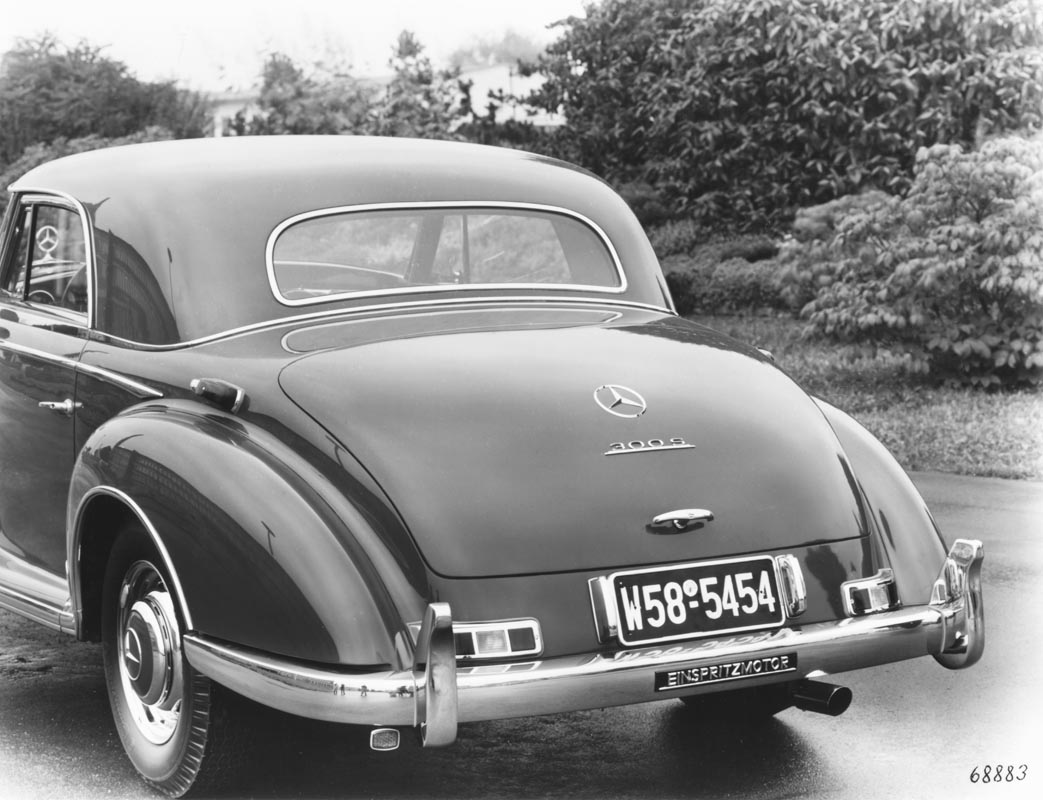 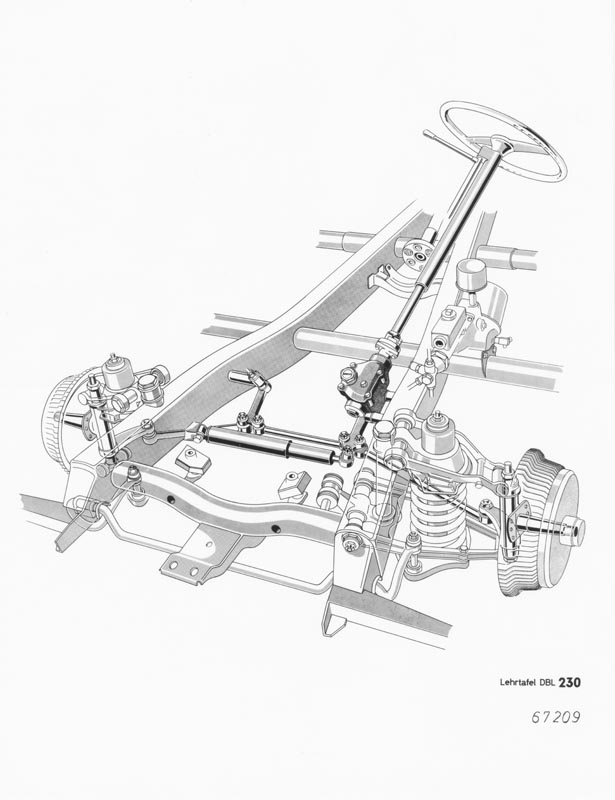 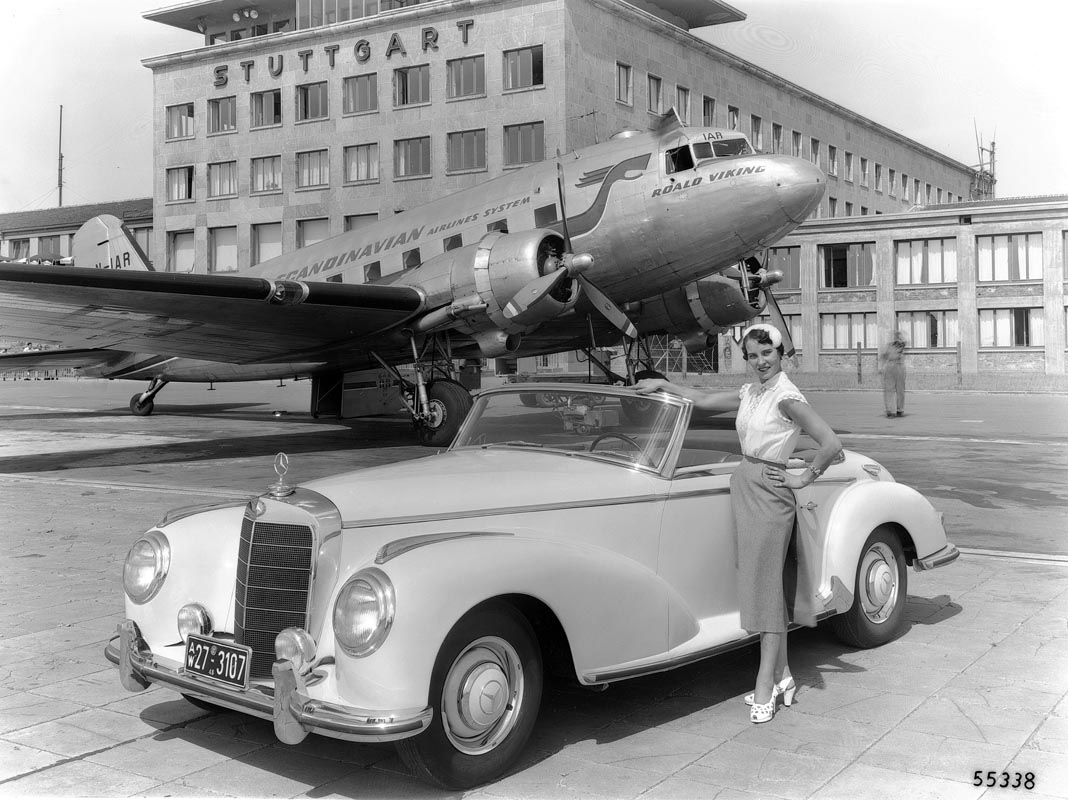 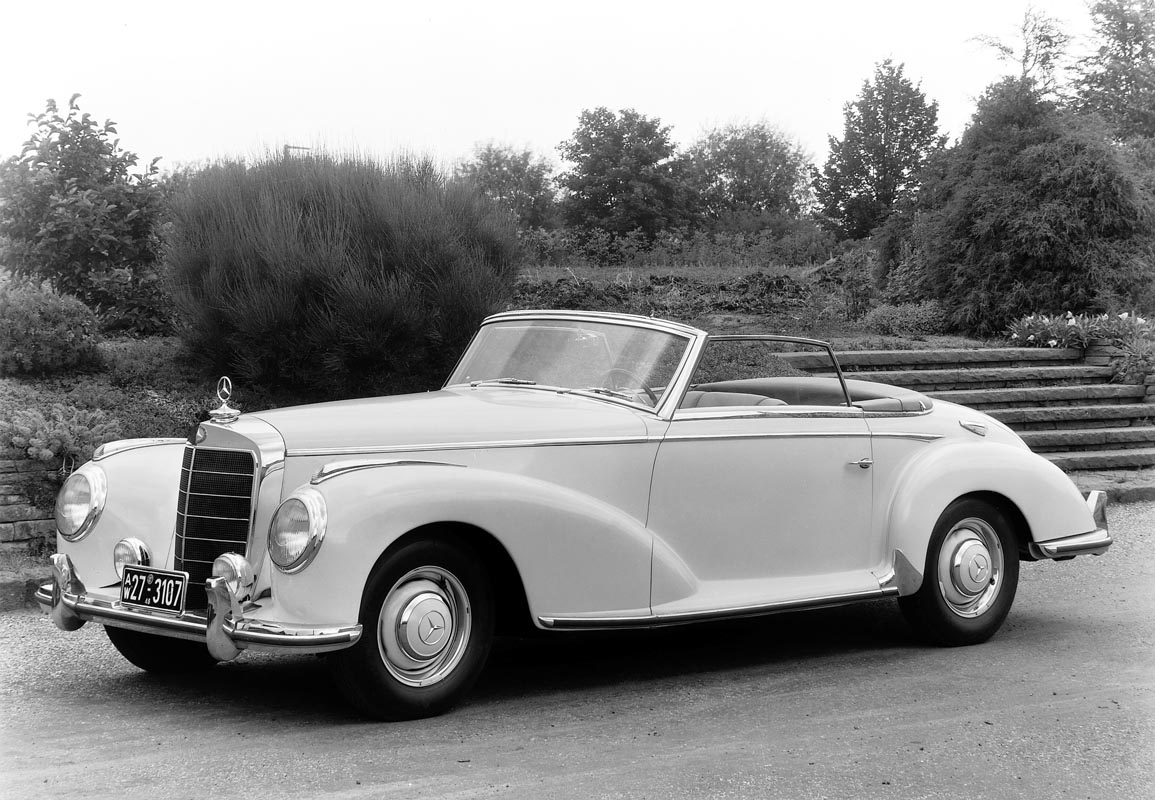 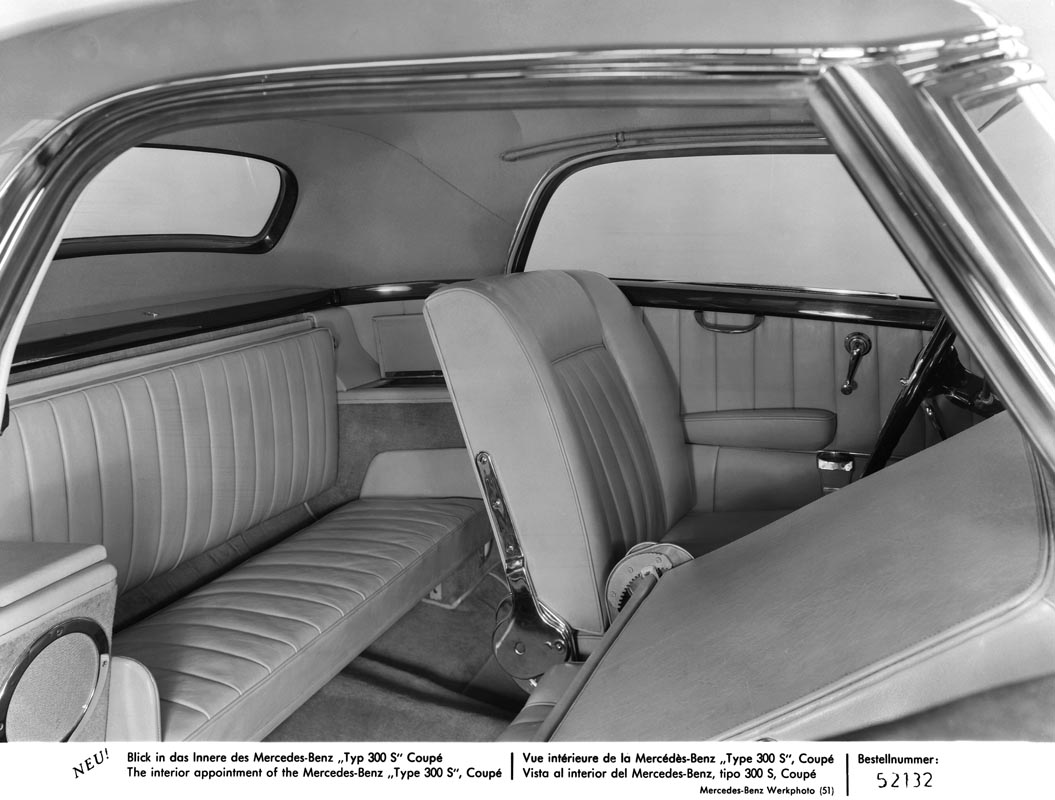 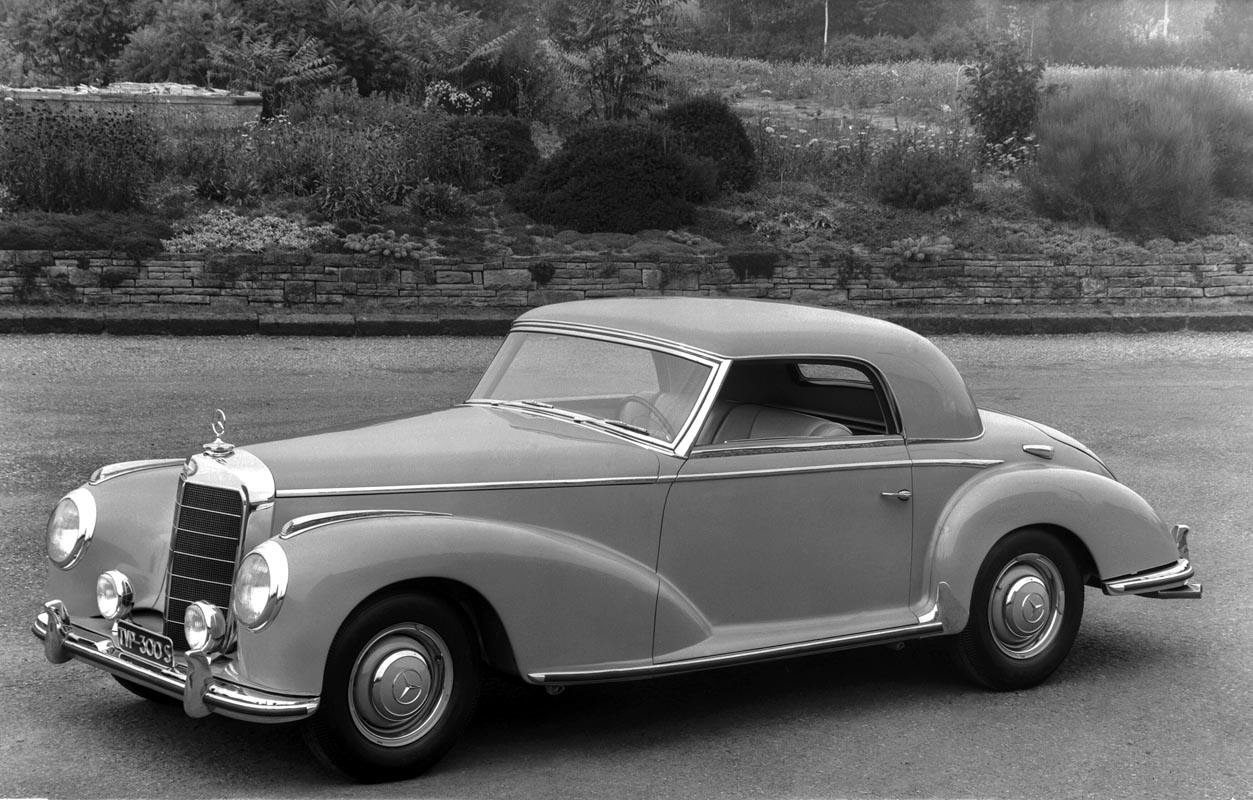 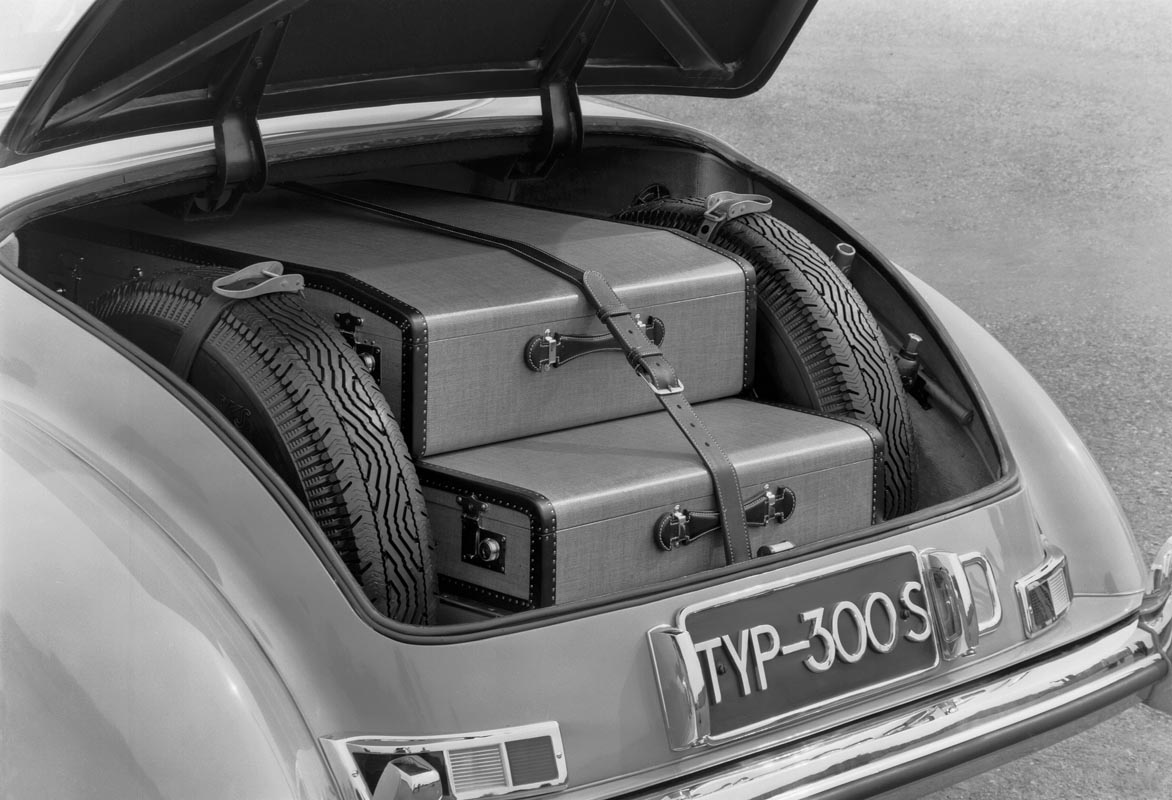 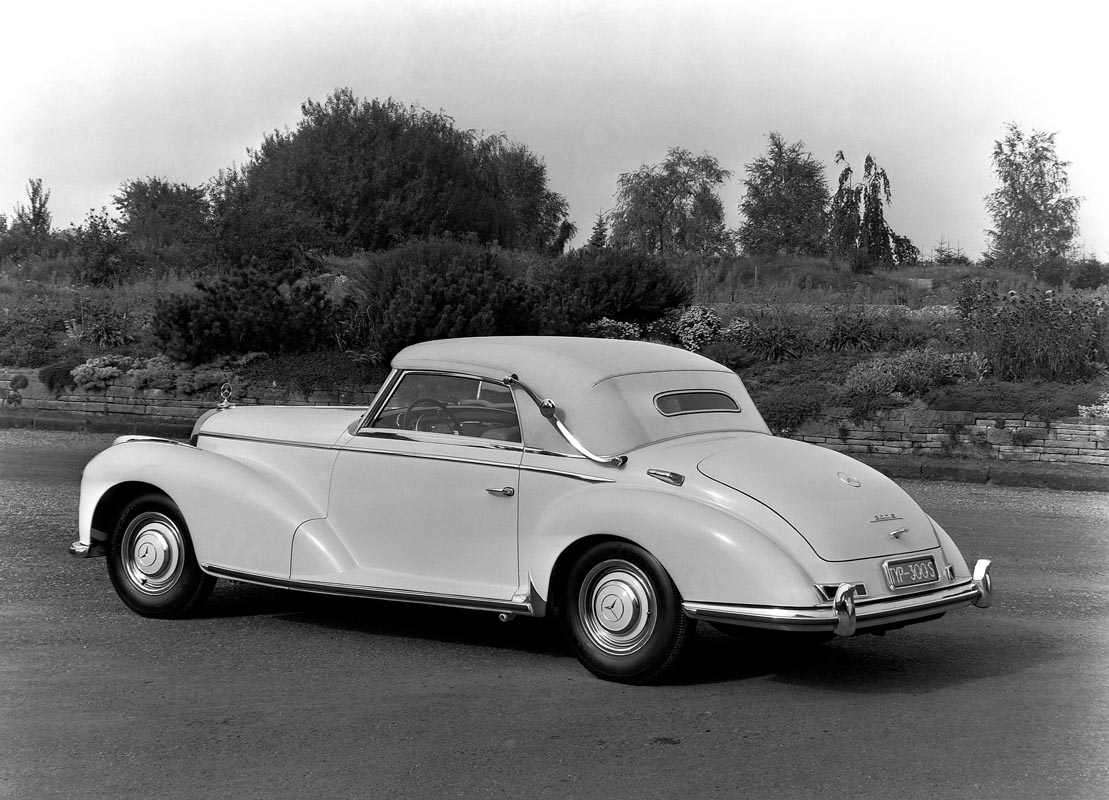 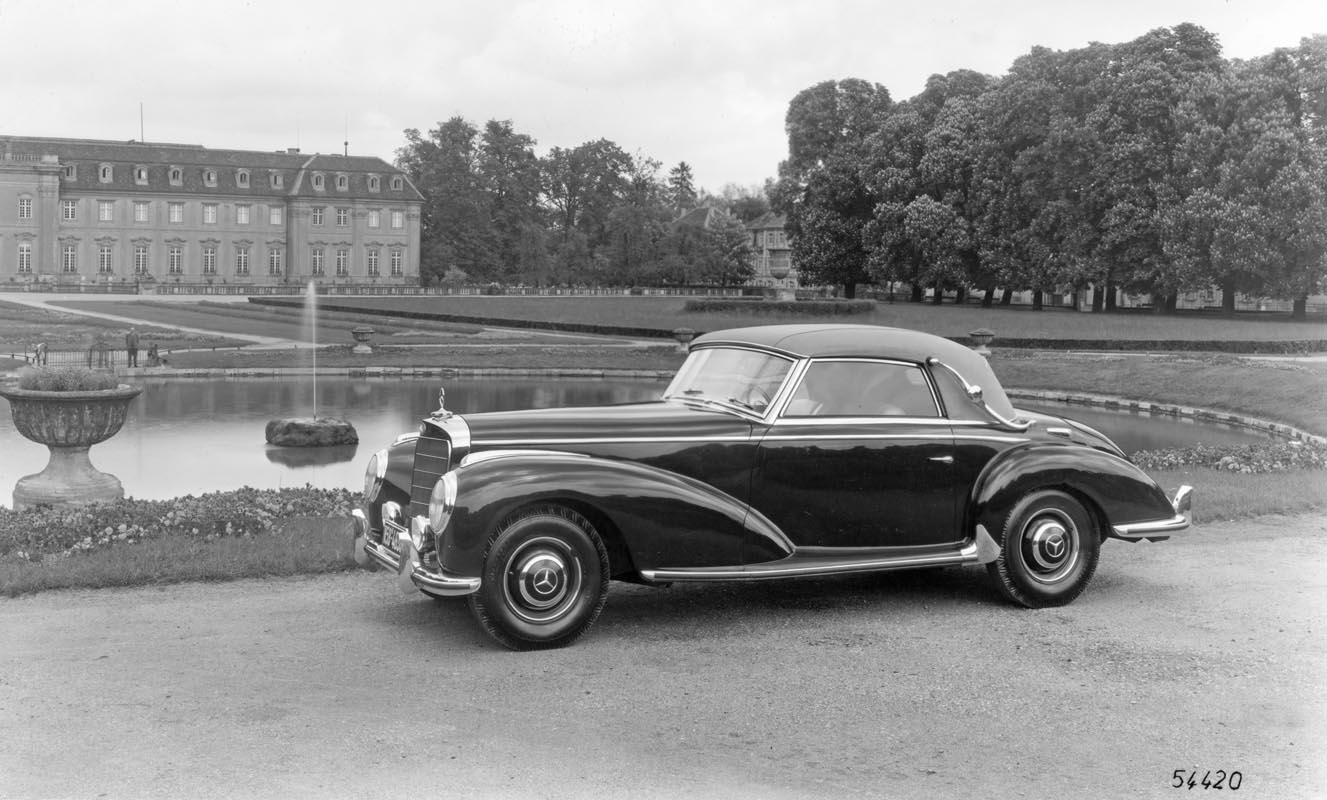 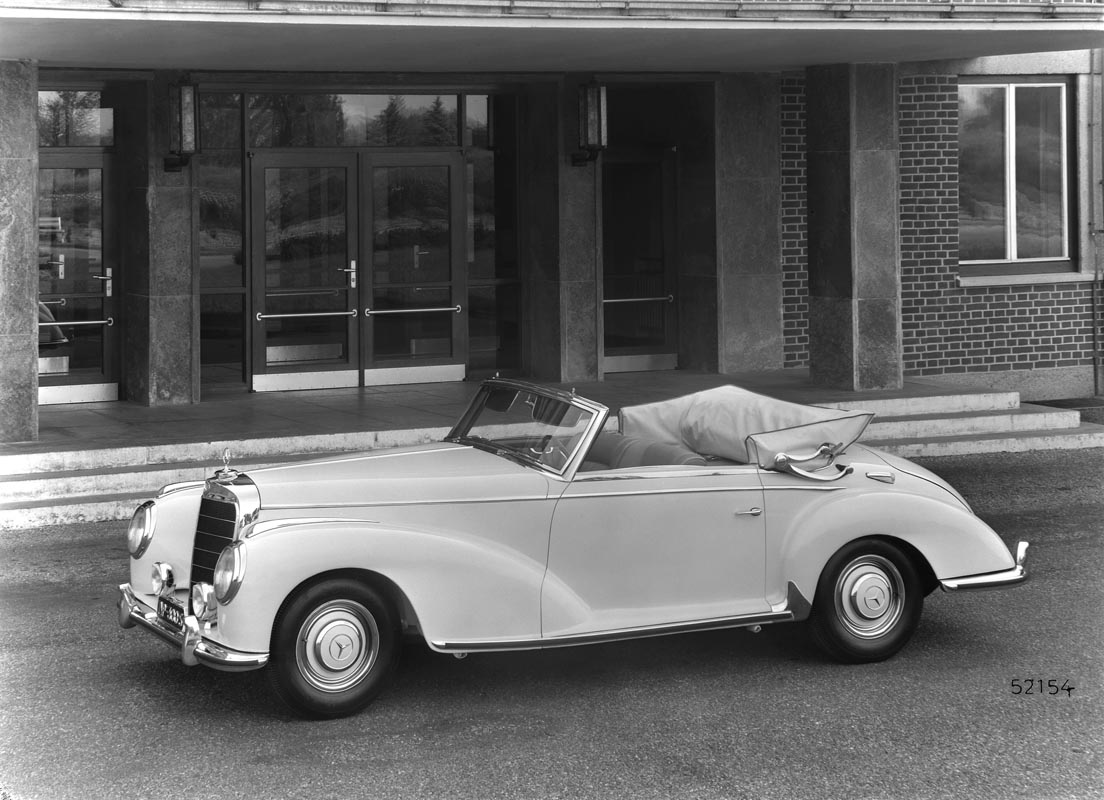 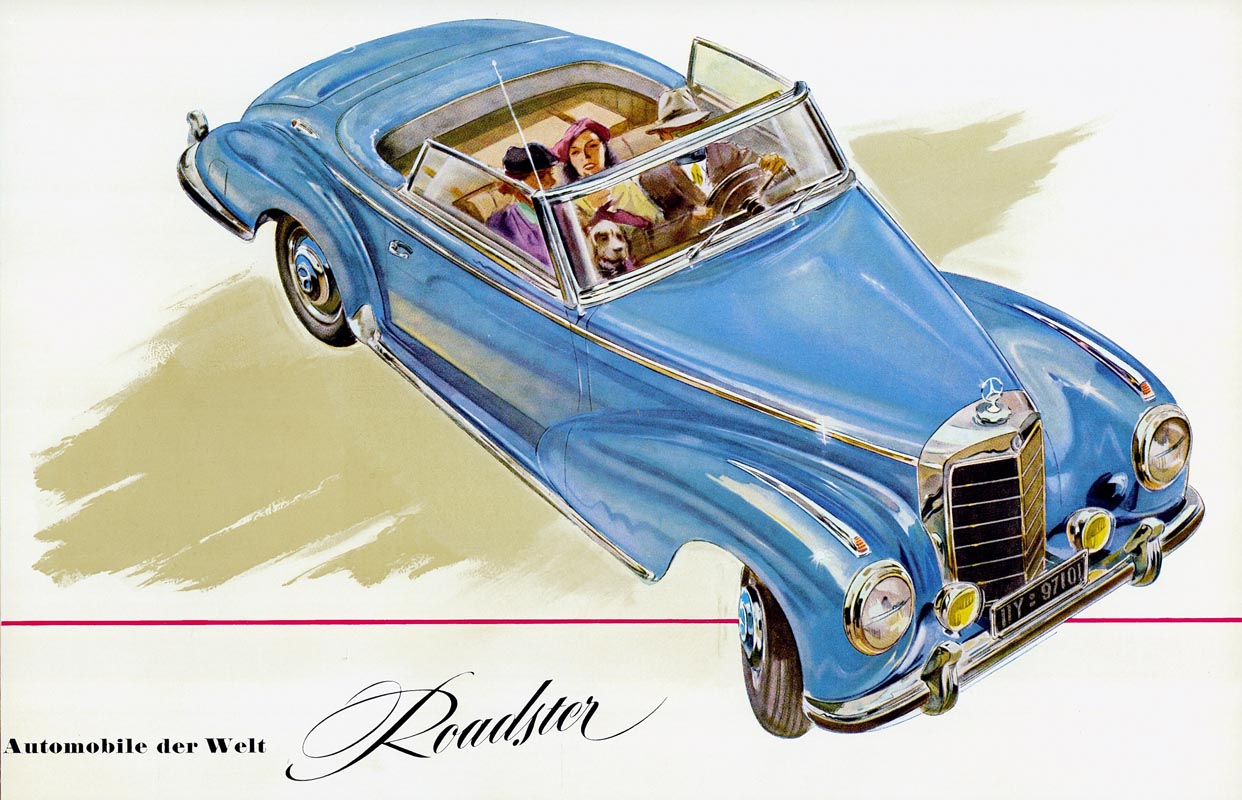 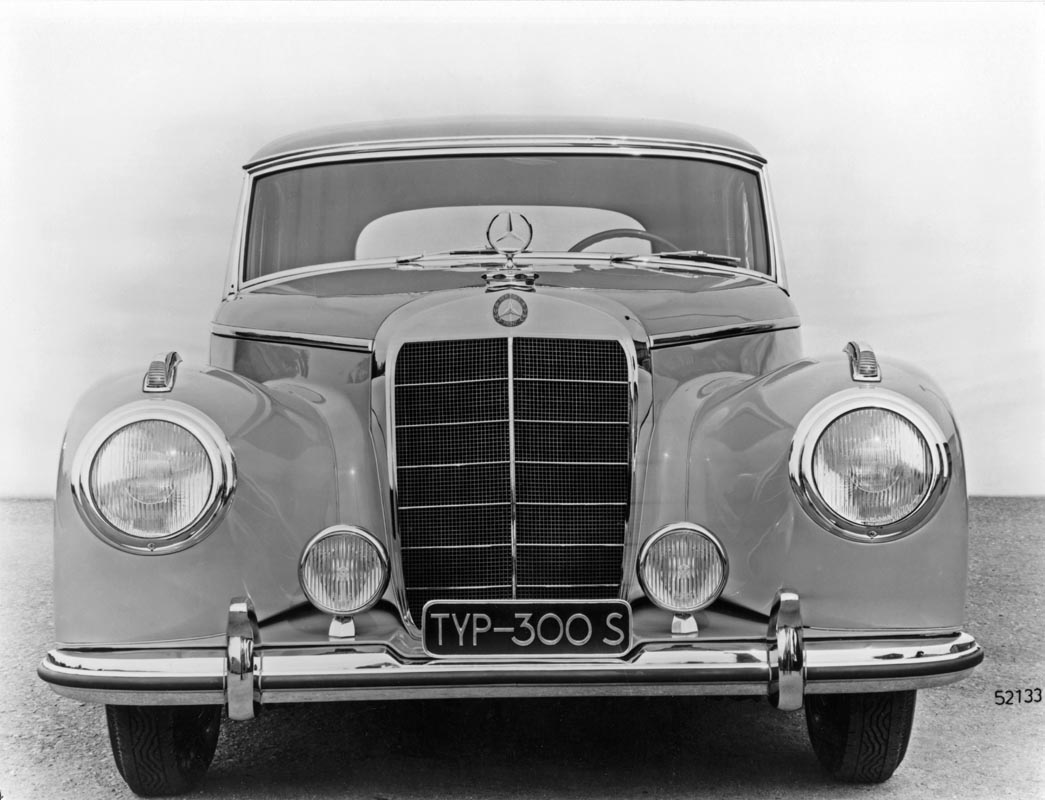