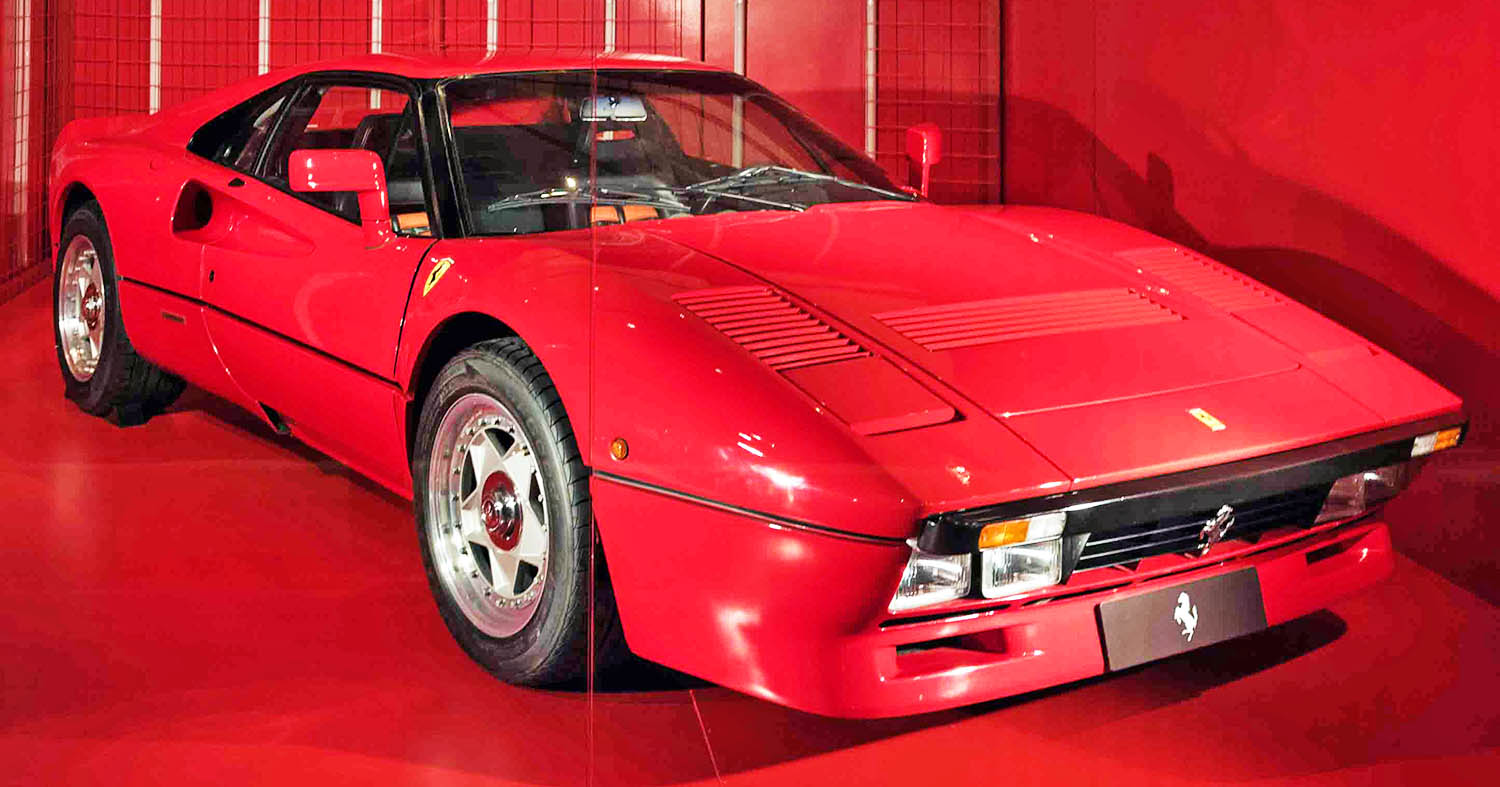 The Ferrari GTO (often referred to as Ferrari 288 GTO) (Type F114) is an exotic homologation of the Ferrari 308 GTB produced from 1984 to 1987 in Ferrari’s Maranello factory, designated GT for Gran Turismo and O for Omologata (homologated in Italian)

Contrary to what is reported historically in the press, the Ferrari GTO was not immediately born to compete in the new 1982 Group B Circuit Race series; Enzo Ferrari did not have overall control of the Road Car division, which was at the time managed by the General Director Eugenio Alzati and the FIAT MD (CEO) Vittorio Ghidella. In 1983 Mr Ferrari noted from discussions with close friends and clients that the road car sales were falling due to stronger competition from rival car makers and what he described as the “excessive gentrification” of the Ferrari model lineup.

Announced by Enzo Ferrari in September 1983, and unveiled at the Geneva Motor Show in March 1984, the GTO sparked off a wave of enthusiasm. The legendary name, the stunning styling by Pininfarina, the engine with its seemingly inexhaustible power (2.8 litres and 8 cylinders) and the widespread use of composite materials, made the GTO the closest thing to a racing car. 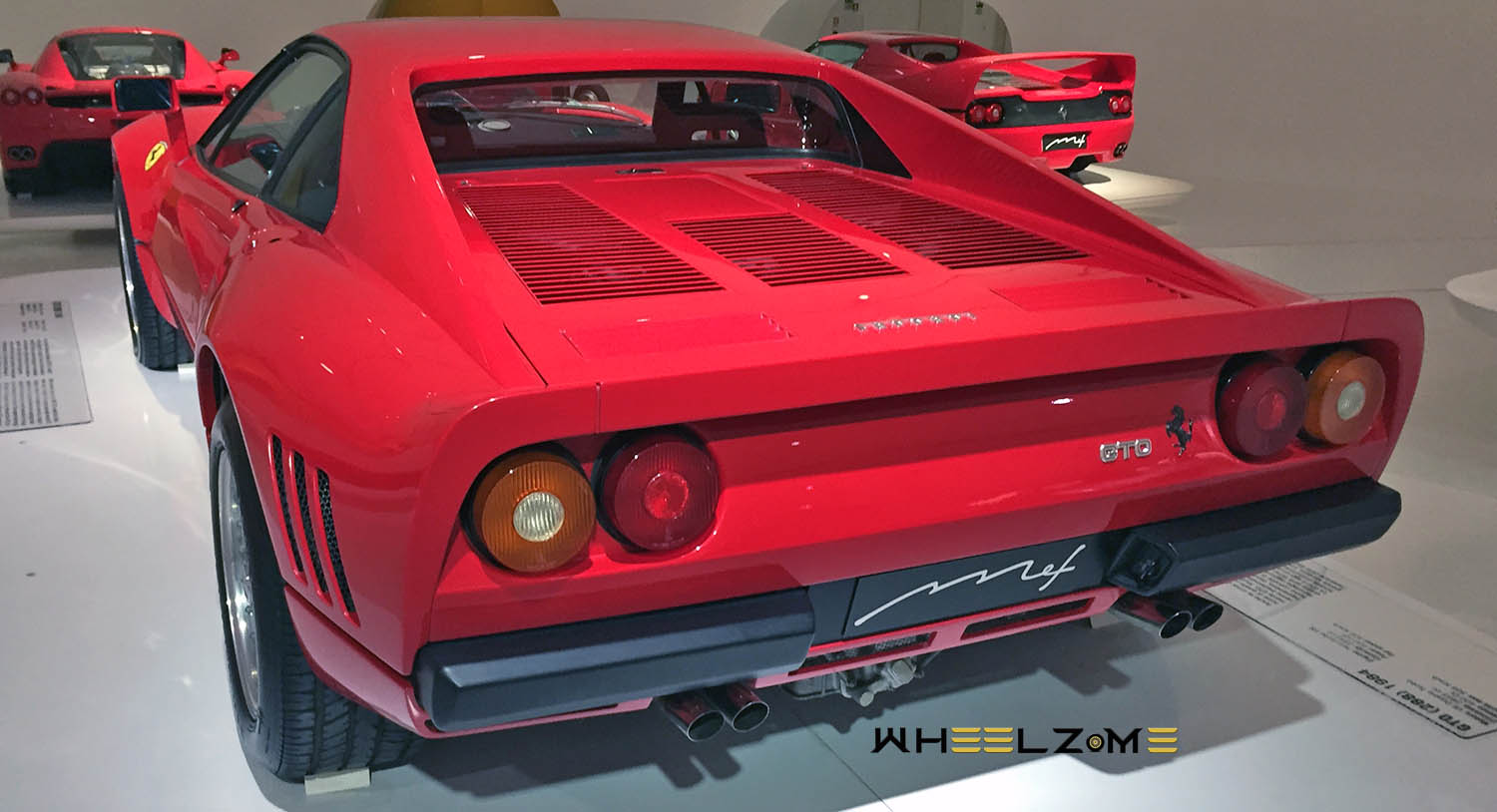 Turbocharging: from F1 to road cars

The success of turbocharging in Formula 1 and the introduction of some new tax laws (above the 1999cc displacement threshold) had prompted Ferrari to first build the 208 Turbo and then discuss turbocharging also in 3 litre form for a road car which could produce 330 bhp. The first 208 turbo did not feature an intercooler so the performance and reliability was somewhat delicate due to high combustion temperatures. Ferrari approached the head of powertrain for the Gestione Sportiva (Racing Division), Nicola Materazzi, to give an opinion on the proposed specification for the new 3L turbo engine.

Materazzi had joined from Osella in 1979 (before then at Lancia Reparto Corse) due to his experience with forced induction and had been involved in the 126 F1 car experimentation between Comprex and turbo. When Materazzi showed confidence that 400 bhp could be reliably extracted from 3000cc (133 bhp/litre), Ferrari placed his trust in him on condition that it would deliver as promised. Ferrari also jokingly suggested that Materazzi work on the 268 engine destined for the Lancia LC2 Group C racing car, due to similarities in displacement and mechanical parts.

To meet customer demand, 272 were built instead of the planned 200: all were sold before production began. In the early years of Ferrari history most road cars produced were limited series, which gave way to more series type production in the late fifties, with the last of the limited production models being the 365 California in 1966-67. The GTO, introduced at the 1984 Geneva Salon, heralded a return to the low volume production series. Initially the reason was not to provide a select few clients with an exclusive form of transportation, but to satisfy the two hundred unit build number for homologation purposes as a Group “B” competition car.

However, the regulations changed so here was a competition orientated car with nowhere to compete. There was no need to worry, as the car had created such a sensation at the Geneva Salon that the planned production run was soon sold out.

In fact there were more buyers than cars available, and eventually the total production run became 272 examples.

The model was built between 1984 – 1986, in the odd number series chassis number range 52465 to 58345. The official model designation was solely GTO, although most people refer to it as the “288 GTO” to differentiate it from the 250 GTO model in conversation, as this legend is frequently referred to as simply the GTO.

The 288 appellation refers to the total cubic capacity of the engine and number of cylinders, 2.8 litres with 8 cylinders. Obviously, the “GTO” model name was a retro touch referring to the legendary 250 GTO of the early sixties, to which it was intended to be the spiritual successor in GT racing, albeit stillborn as already noted.

The GTO was the real starting point for the “Supercar Syndrome”, showing that there was a market for a low volume production, extreme performance sports car, at almost any cost! Before people had even taken delivery of their GTO the contract had been sold on, sometimes more than once, and with each change of hands came a healthy profit for the vendor.

Through the remainder of the eighties there was a knock on effect to the more mundane (in elitist terms) models.

New models were introduced by various manufacturers to capture a slice of the action, and soon virtually the whole classic and sports car market was caught up in a whirlwind of spiralling prices, that eventually had nowhere to go but down. When they did, it was suddenly and with a bang, leaving many speculators with assets of massively negative collateral.

The GTO really captured the buyer’s imagination, although visually it was nothing startlingly different from the mainstream Ferrari eight cylinder models of the period, looking like a 308 that had been on a course of steroids, with more bulbous wheel arches, a lower stance and bigger spoilers. 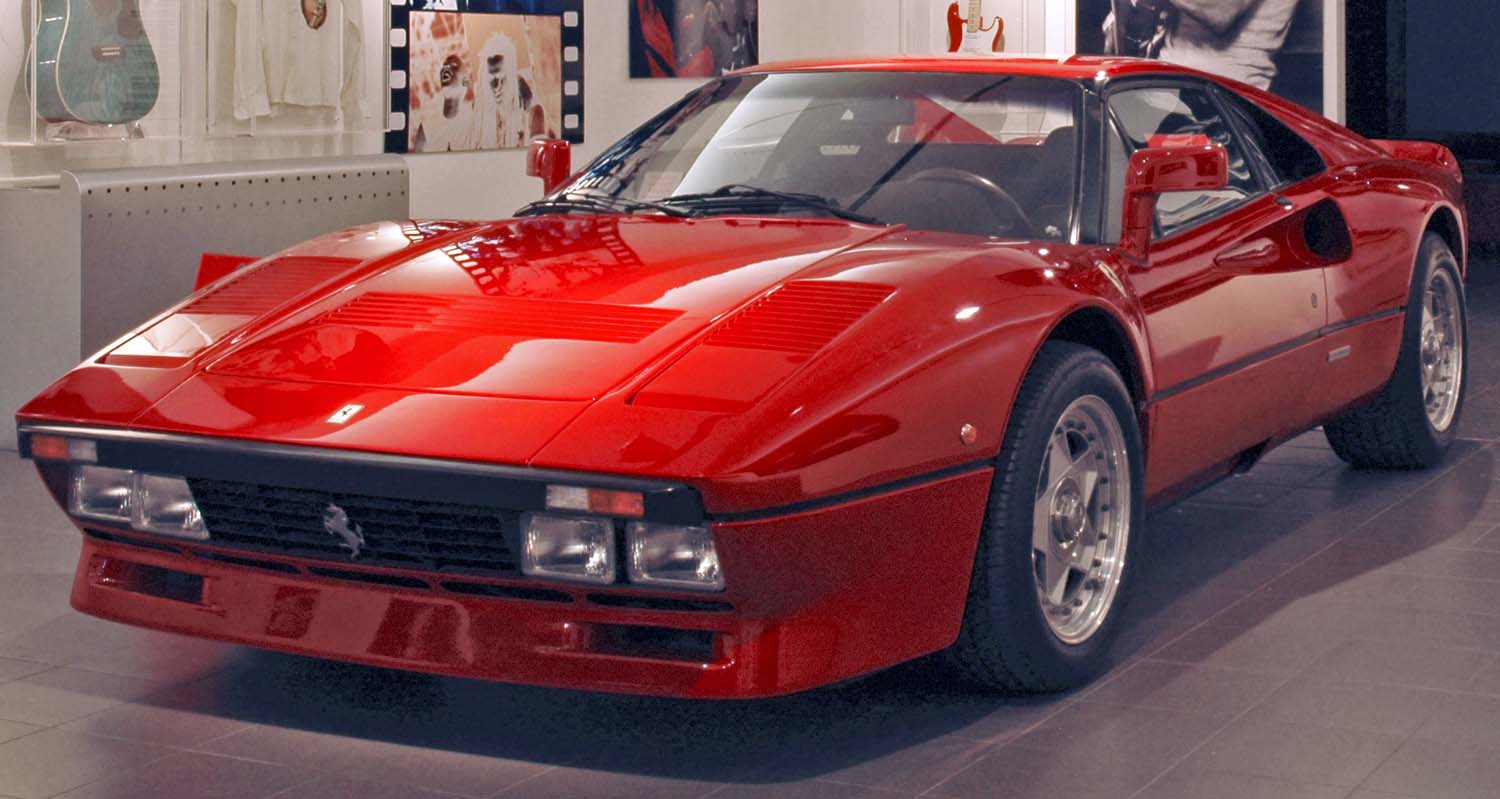 Even though they were visually similar both inside and out, and both were powered by a V8 engine, that was the extent of the similarities between the GTO and the 308 series. Although based on the 308 series silhouette, the GTO shared very few common components, the wheelbase was longer, the mid mounted engine was placed longitudinally in the chassis, and the majority of body panels were constructed from composite materials or resin mouldings.

The major visual differences were as follows. There were more bulbous front and rear wings, and the trailing edges of the rear wings had triple vertical exhaust air slots (a reference point to the front wings of the sixties 250 GTO).

The front valance spoiler was deeper, housing paired rectangular driving lights in the radiator grille extremities, the tail had a pronounced lip spoiler, and the door mirrors stood on tall stalks. Also the multi slotted engine lid was hinged at the trailing edge, rather than being forward hinged in unit with the sail panels on the 308 models.

The mid mounted engine was a 90 degree V8 unit fitted longitudinally, with the forward end so close to the cabin bulkhead to optimise weight distribution, that a service hatch was provided in the bulkhead for maintenance. This was the first longitudinally mounted V8 engine fitted in a Ferrari production road car, and also the first to be fitted with twin turbochargers.

The total cubic capacity was 2855cc, with a 80mm x 71mm bore and stroke, a compression ratio of 7.6:1, and factory type reference F 114 B 000. It had four valves per cylinder, twin overhead camshafts per bank, each with its own toothed drive belt, dry sump lubrication, with twin IHI turbochargers feeding intake air via a pair of Behr intercoolers at 0.8 bar, coupled to a Weber-Marelli IAW combined ignition/fuel injection system, to provide a claimed power output of 400 bhp at 7000rpm.

The differential assembly was mounted on the back of the engine in unit with the rear mounted five speed synchromesh gearbox, with its removable end cover for ease of ratio changes, a throwback to its original competition intent. 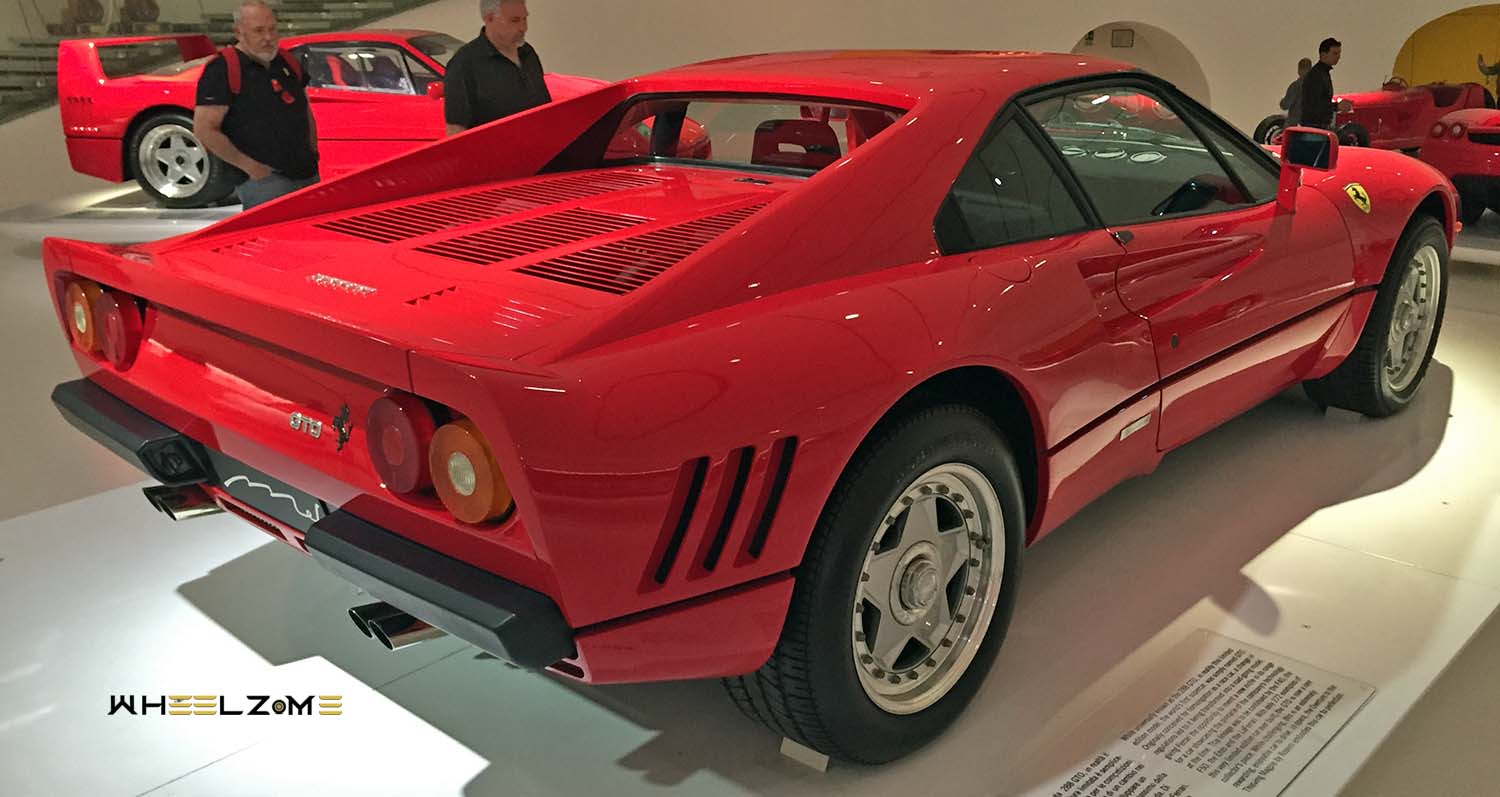 The Ferrari F114B road-car engine and the Lancia 2.6L V8 race engine developments progressed closely, with some draughtsmen employed from Abarth to complete detail design on components for manufacture at times when the Ferrari draughtsmen were at full capacity. In order to improve overall performance, several key aspects of the original 308 vehicle layout were altered: the engine did not grow in displacement but was turbocharged, it remained mid-mounted but now longitudinally instead of transversely, the wheelbase was elongated by 200mm, the outer bodywork required modifications to maintain pleasing proportions. The car used water-cooled IHI turbochargers from Japan compared to the KKK turbochargers used in Formula 1 due to the better materials and aerodynamic internal designs which allowed faster transient response. IHI had bought patents from Swiss manufacturer Brown Boveri (Baden) that had supplied Ferrari with the Comprex systems.

Some of the GTO’s styling features were first displayed on a 308 GTB design exercise by Pininfarina shown at the 1977 Geneva Auto Salon. The 288 GTO had started out as a modified version of the 308/328 to hold down costs and to build the car quickly, but little of the 308/328 was left when the 288 GTO was finished. Fortunately Ferrari could count on customers who were loyal when it came to spending more if they could access performance and style that was unmatched, so the unplanned deviation from the original cost targets did not necessarily prove an issue.

Easily noticeable differences were the GTOs bulging fender flares, larger front/rear spoilers, large “flag-style” outside mirrors and four driving lights at the far sides of the grille. Retained from the original 250 GTO were slanted air vents, put in the GTO’s rear fenders to cool the brakes, as well as the rear wing’s design, borrowed from the 250 GTO’s original wing. The GTO also had wider body panels than the 308’s because they had to cover much larger Goodyear tires mounted on racing wheels. The suspension’s could be set higher for road use and lower for racing on tracks. Bodywork material was new and lighter for better acceleration and handling. The GTO’s weight was 2,555 lb (1,159 kg), compared to 3,085–3,350 lb (1,399–1,520 kg) for the 308/328. Steel was used just for the doors because major body panels were made from molded fiberglass. Kevlar was used for the hood, and the roof was made from Kevlar and carbon fiber.

Materazzi felt that with the latest road speed limits and stricter fines, it was increasingly hard for clients to really prove the potential of cars with a high performance. Ferrari asked what was his proposal, to which he suggested returning to racing in the GT class, something which had been interrupted after the 512 BB LM. The overall permission to modify the GTO road car into the Evoluzione for a racing programme however had to be ratified by Eugenio Alzati. He permitted it on conditions that the engineers interested in the project work outside of the Monday to Friday timetable (which was dedicated for development of 328 and other models). The lessons learnt during the development of the engine for the Lancia LC2 could be applied to the racing version of the GTO, such as the carefully engineered conicity of the intake plenums to ensure accurately balanced air flow and pressure to each cylinder and the setup of the turbochargers to produce in excess of 650 bhp.

The GTO Evoluzione included all the necessary modifications (bodywork, chassis, safety systems) to comply with the FIA regulations which permitted 20 cars per year to be specifically built for rally or track racing. Due to multiple deaths and the inherent danger involved with group B rally racing, the Group B Circuit series was suspended at the end of 1986. As a result, the GTO Evo never raced. All GTO road cars came in a stock red color, except one which was black. All GTO Evo cars came in red colour.

Like any Ferrari car, the low production numbers for the GTO were intended to give an exclusive product for the enthusiast buyer. The number of GTO’s produced did indeed fit in the minimum requirement of 200 required by the FIA and in fact the factory produced 70 more plus a couple extra to please the Agnelli family, an F1 driver or anybody else who the Commendatore predicted might insist on a last minute purchase option.

Although the production car test team – headed by Dario Benuzzi – did not include any of the Formula 1 drivers, Michele Alboreto occasionally had involvement in giving feedback on cars such as the 288 GTO, and later the 328 Turbo and F40. In particular he agreed with Enzo Ferrari’s return to a breed of cars which were much more fiery, describing the GTO as “cattiva” (angry) and praising its low engine centre of gravity compared to the Testarossa. 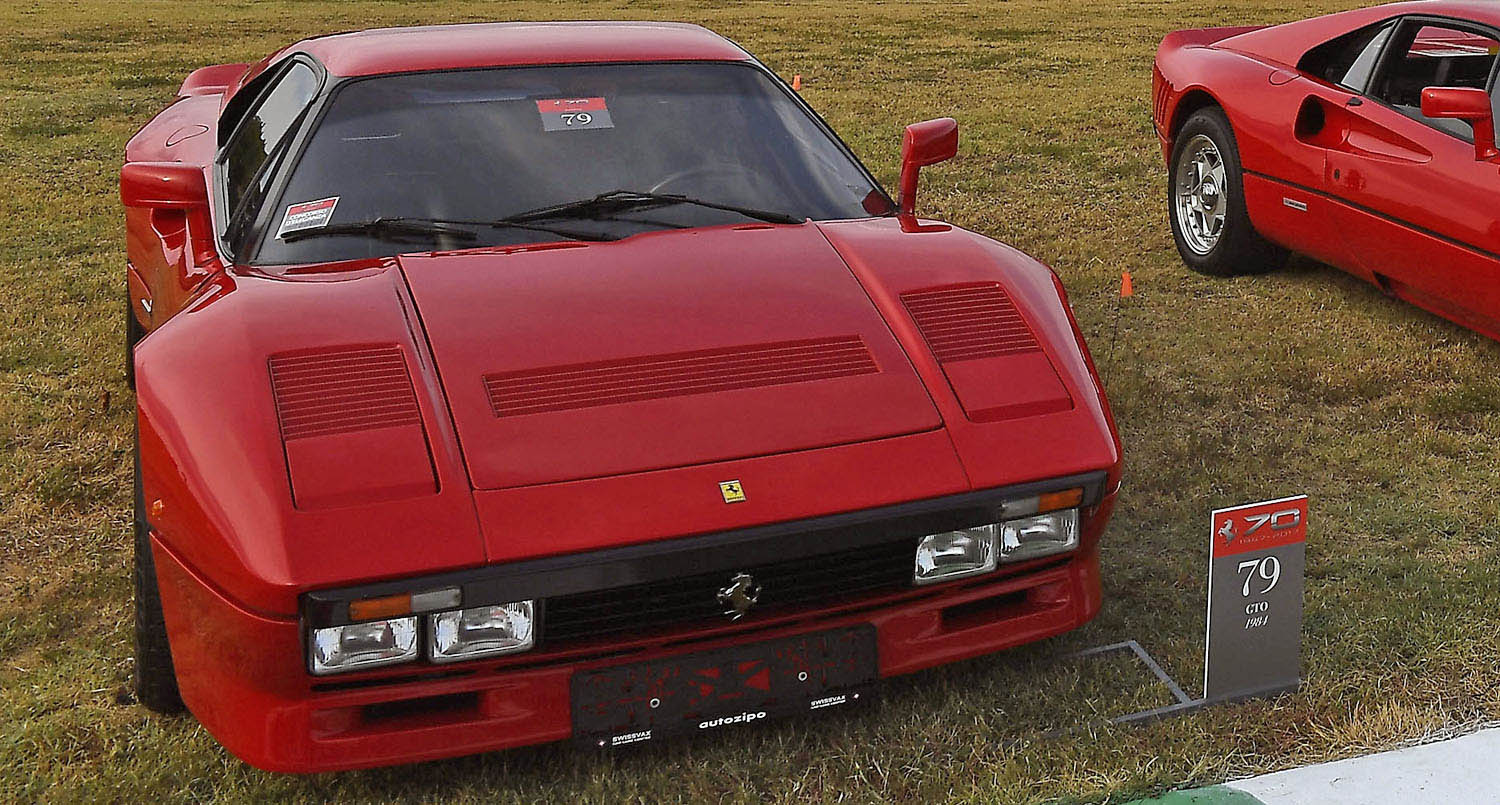 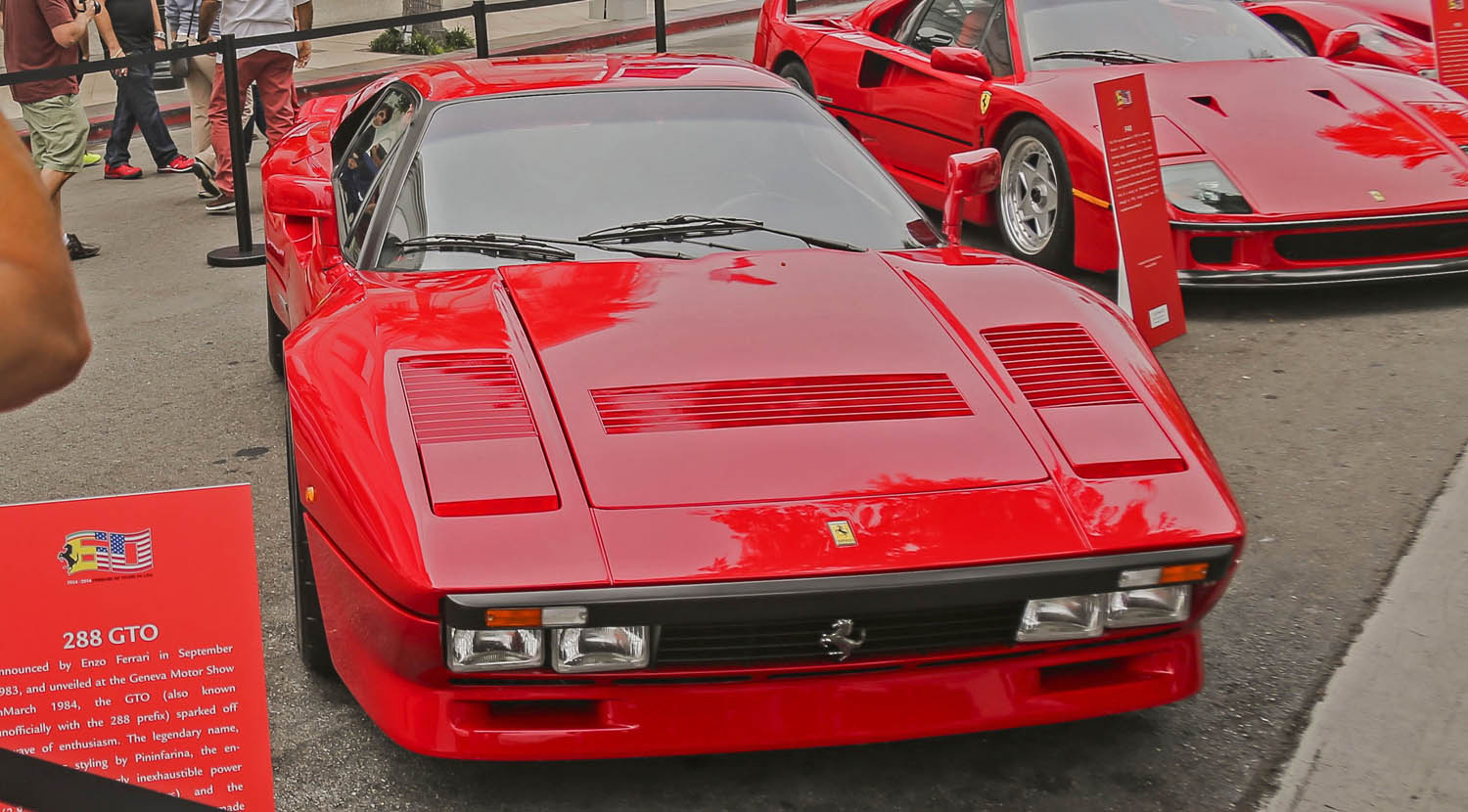 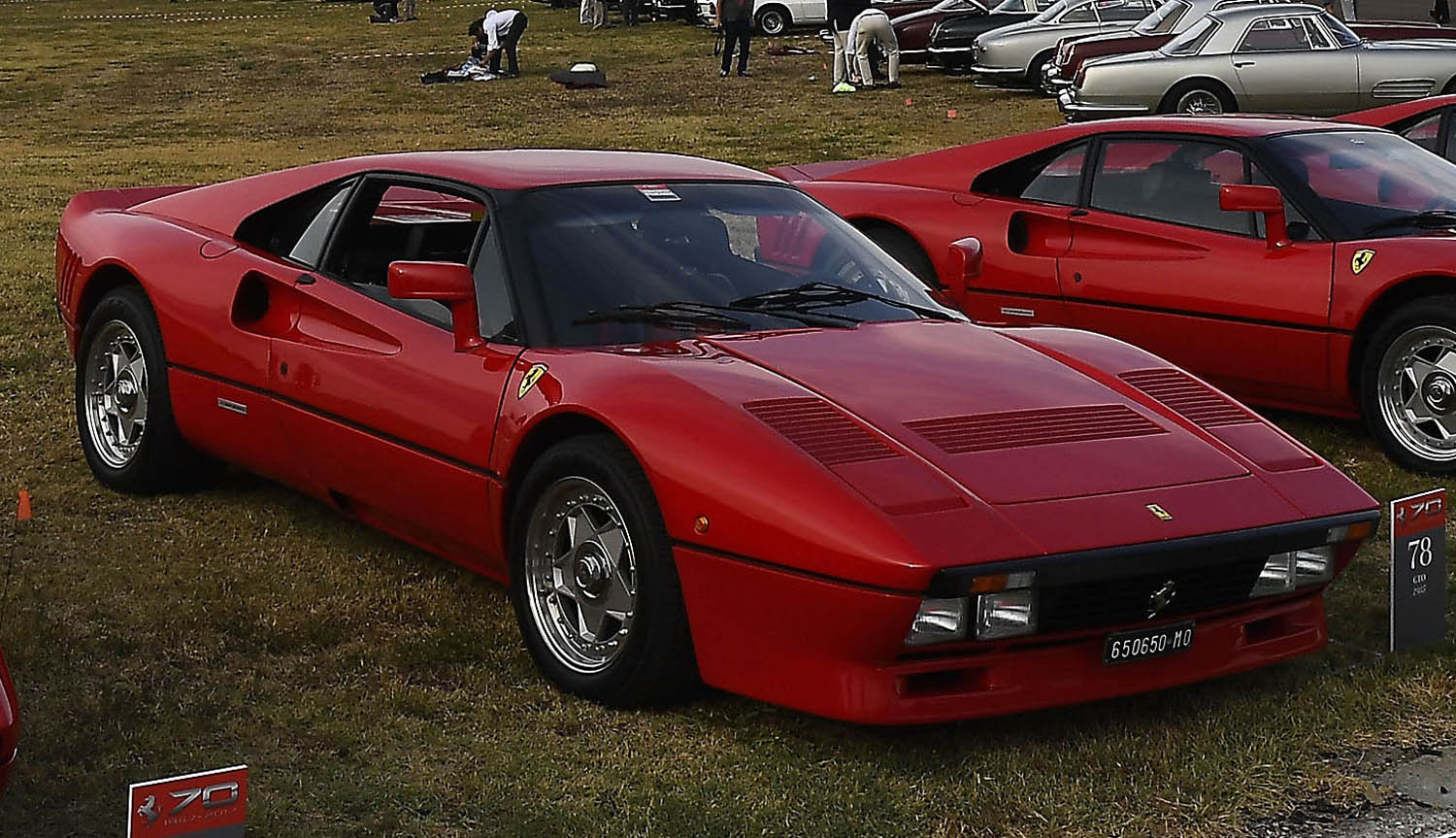 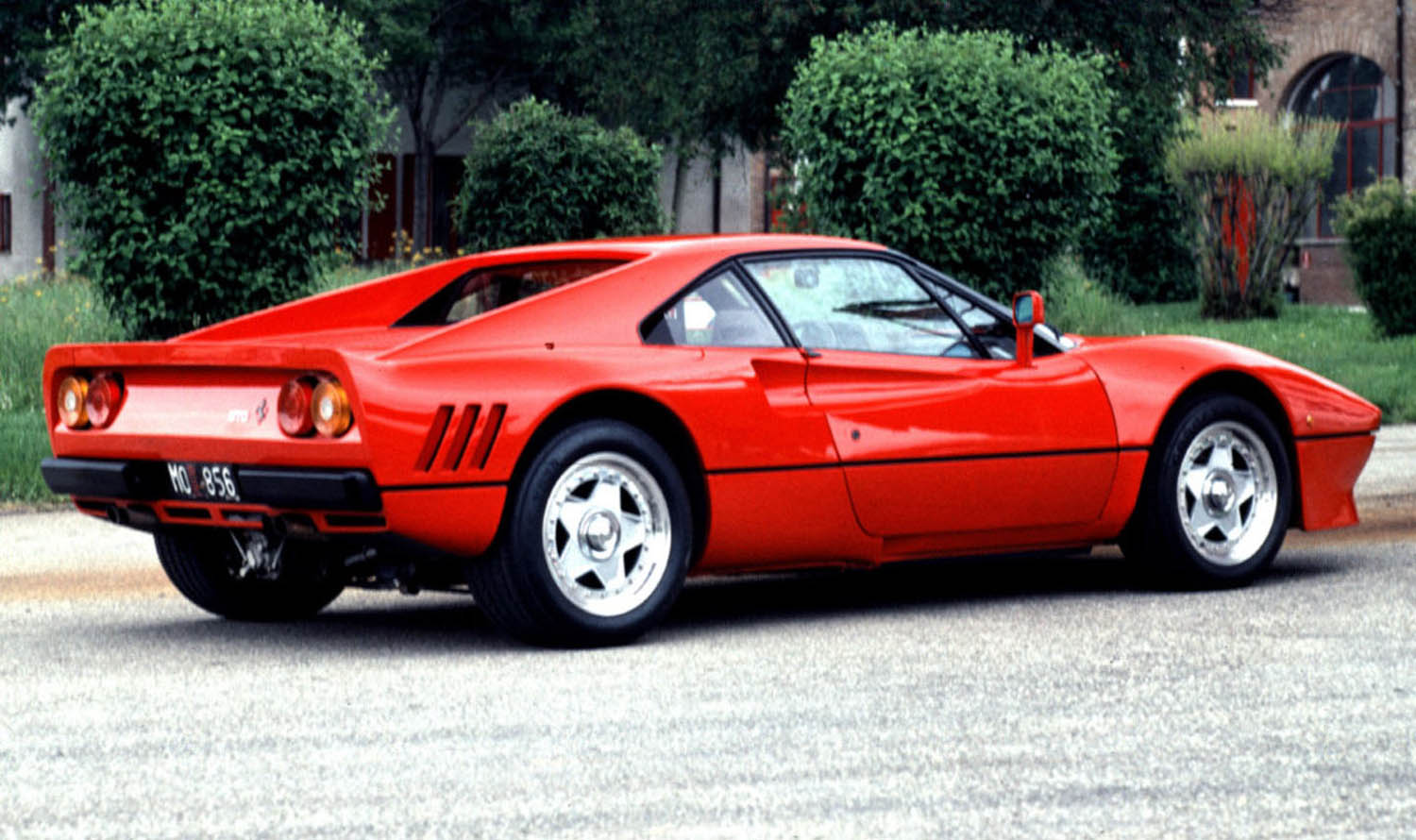 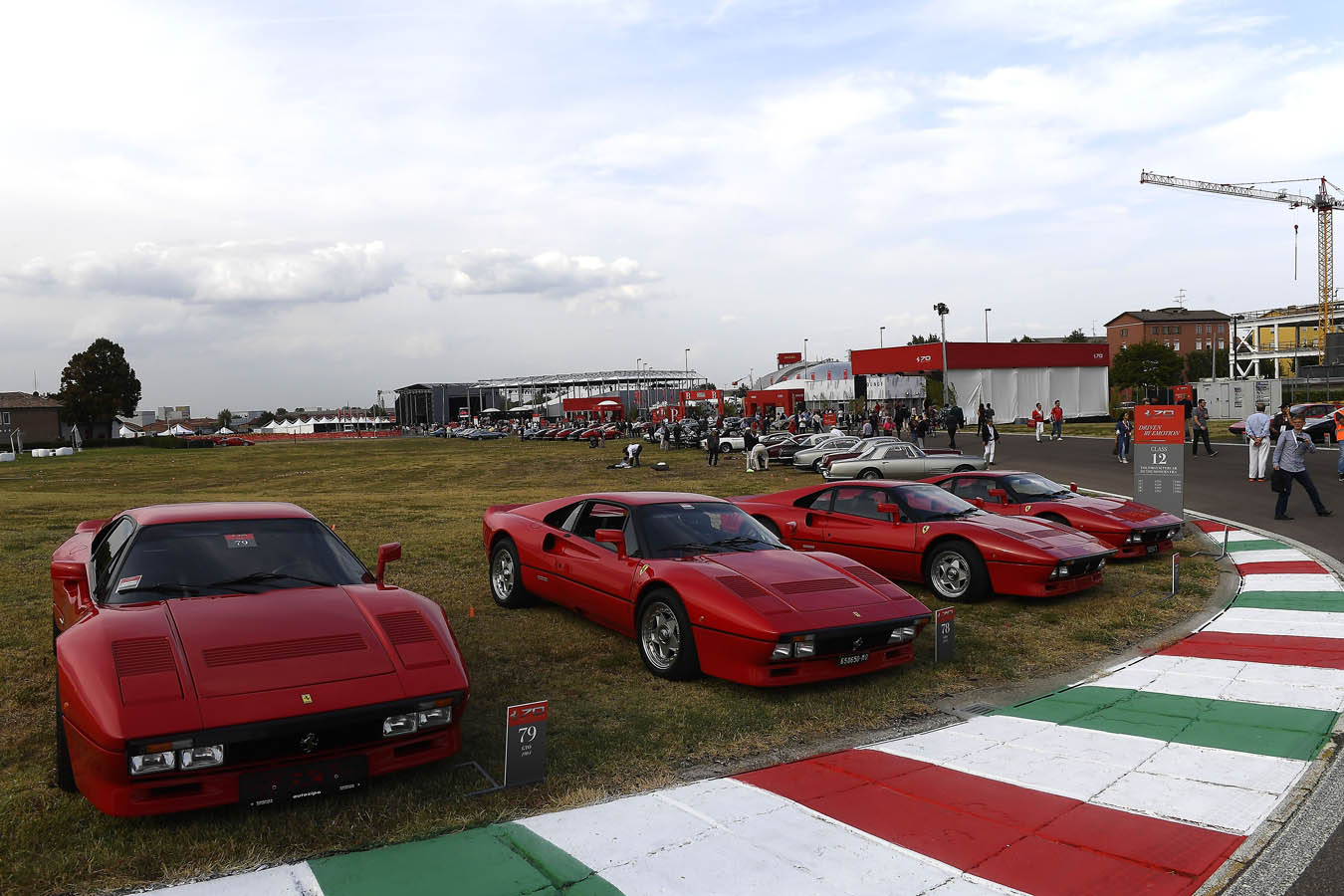 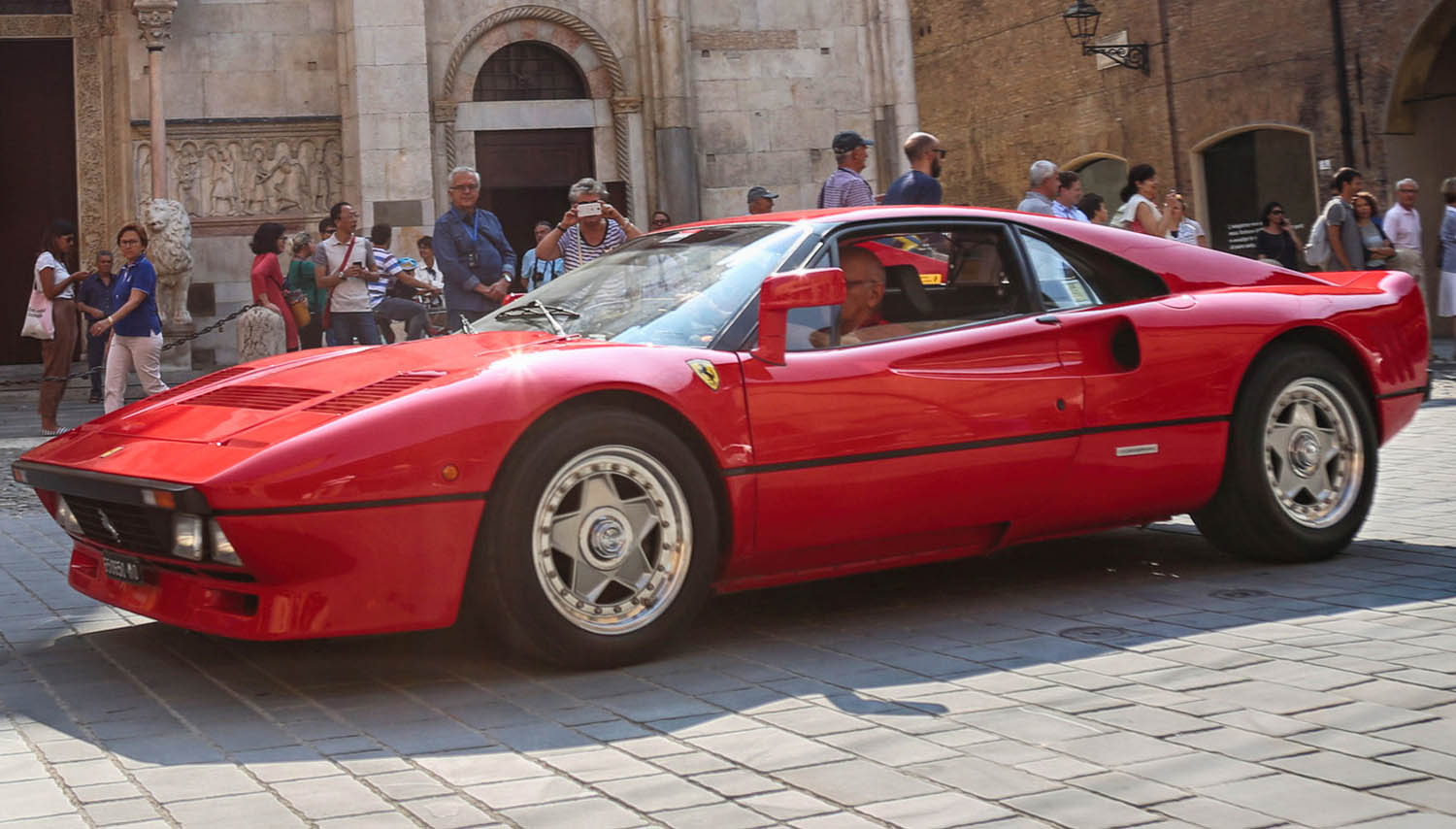 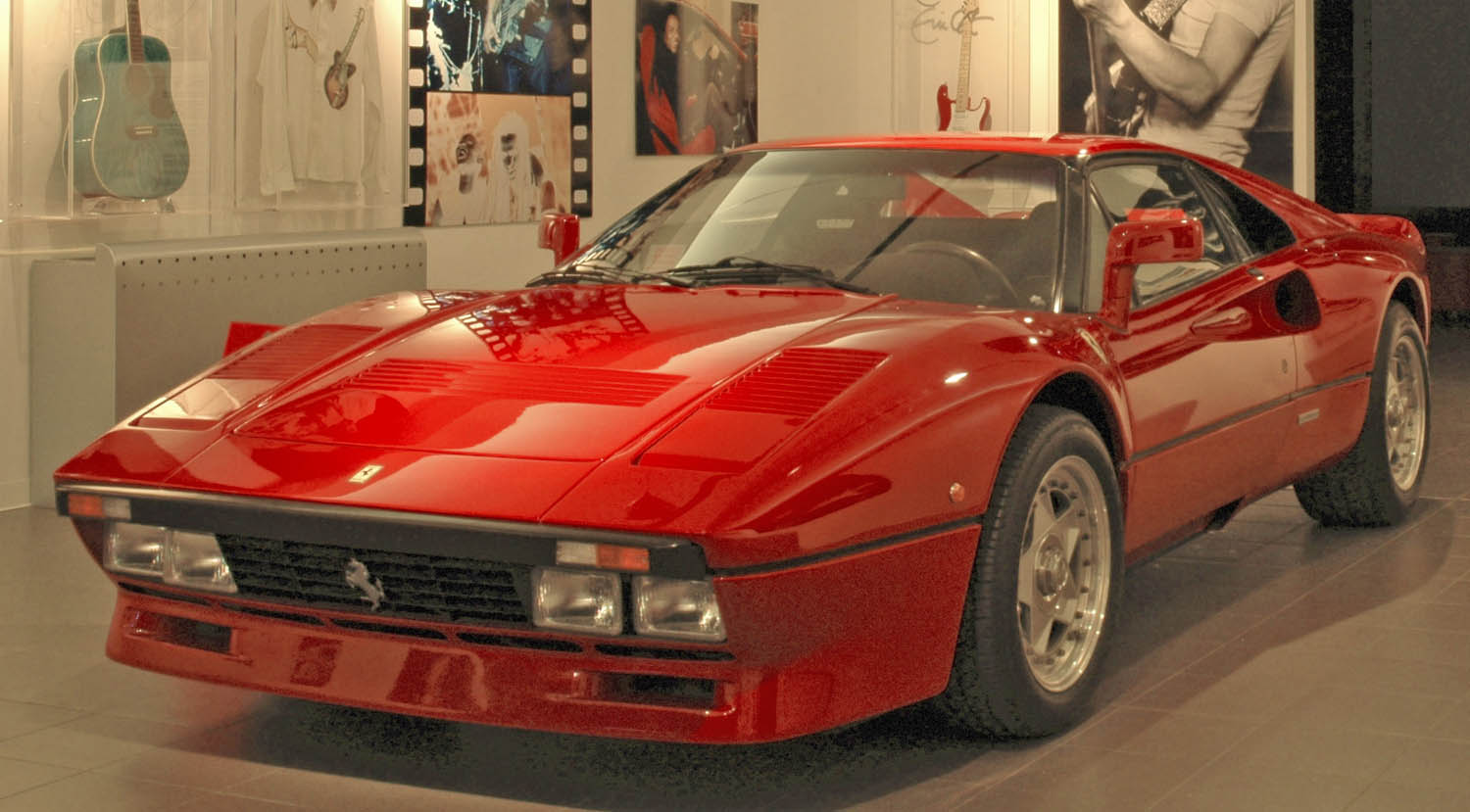 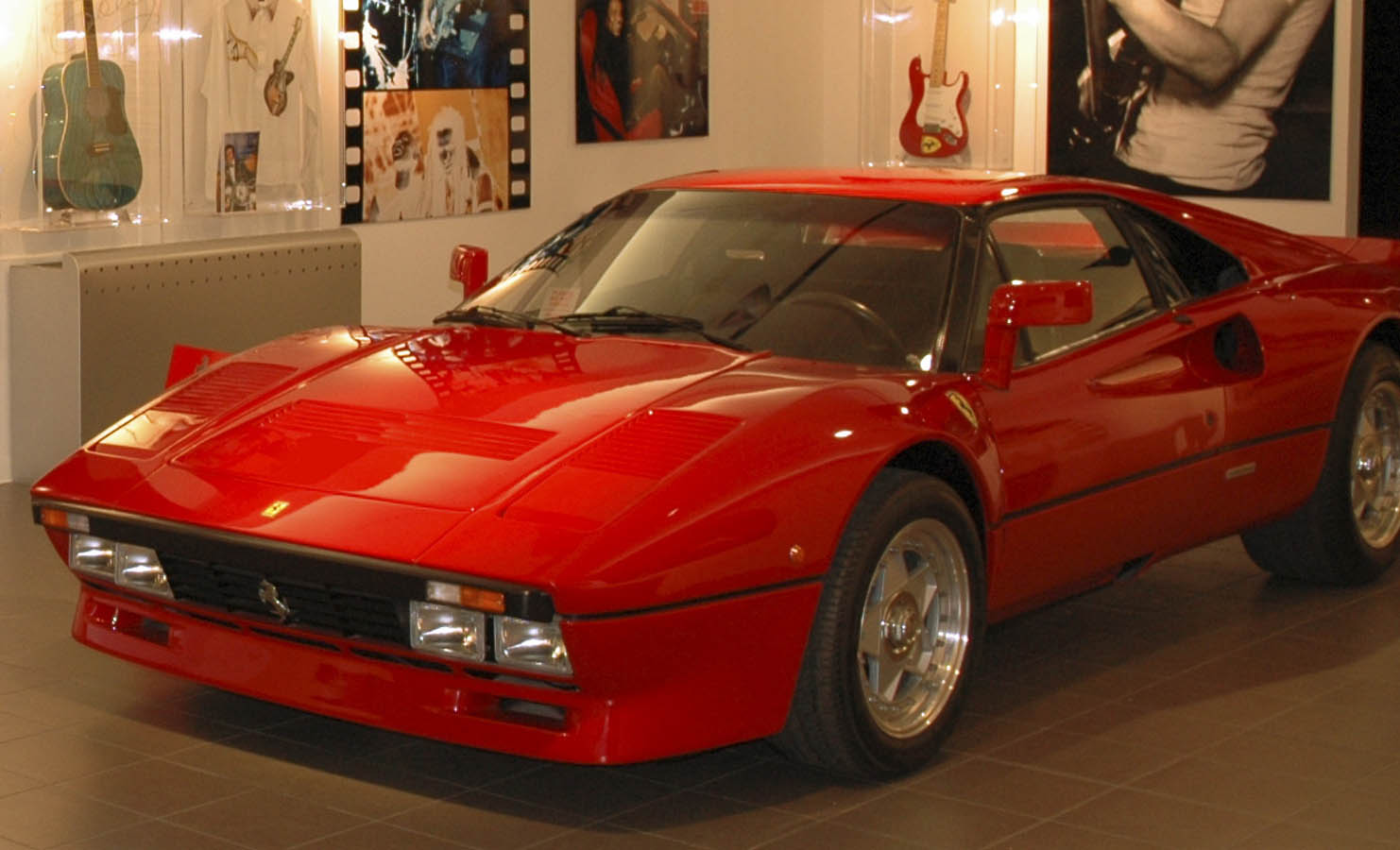 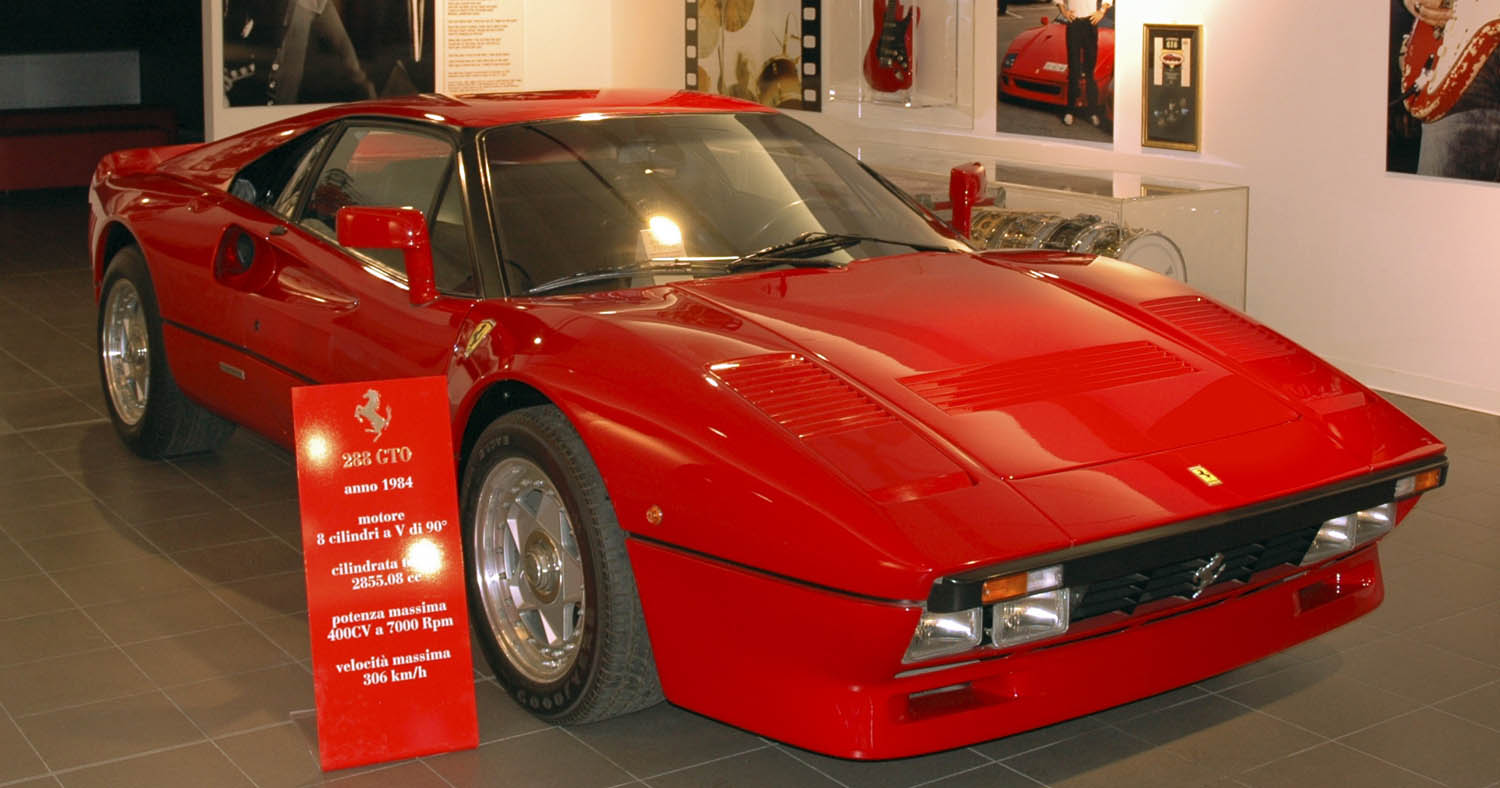 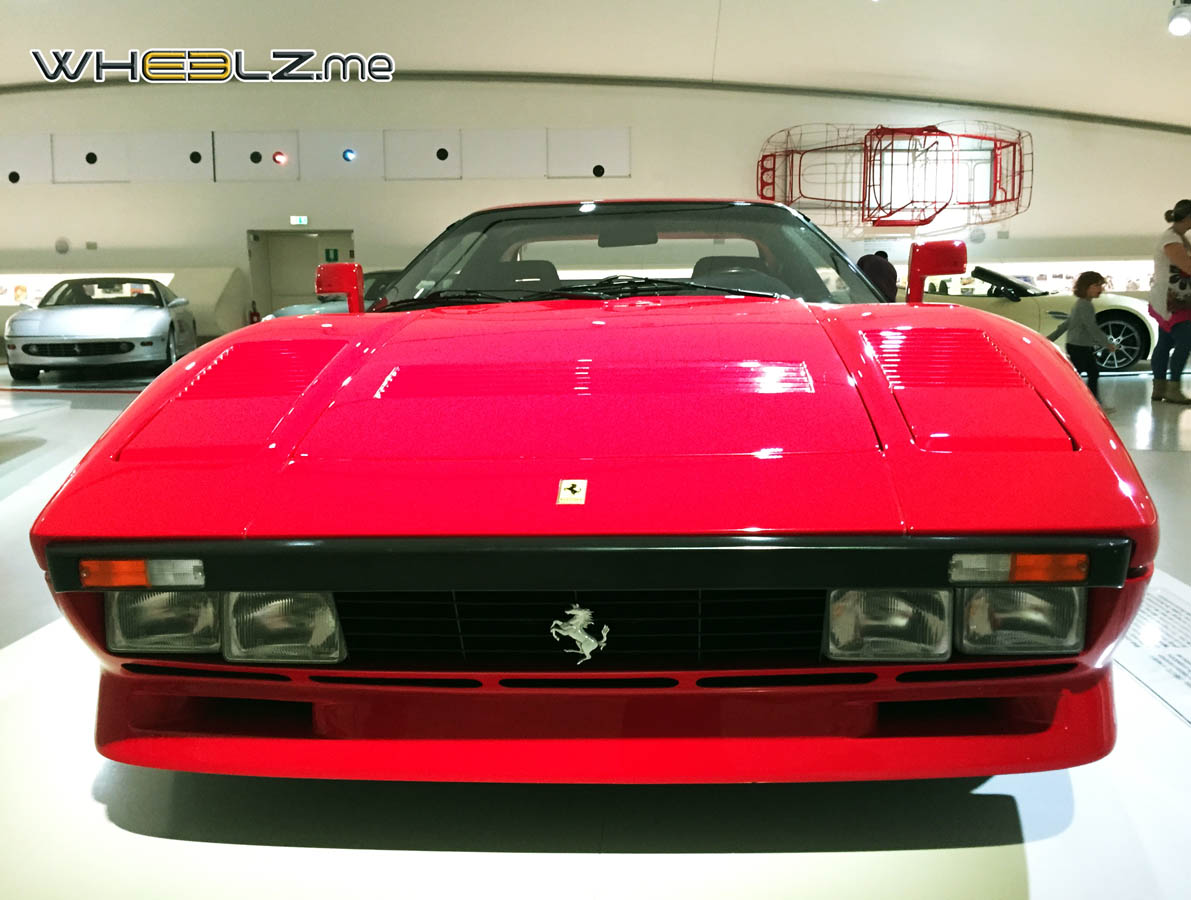 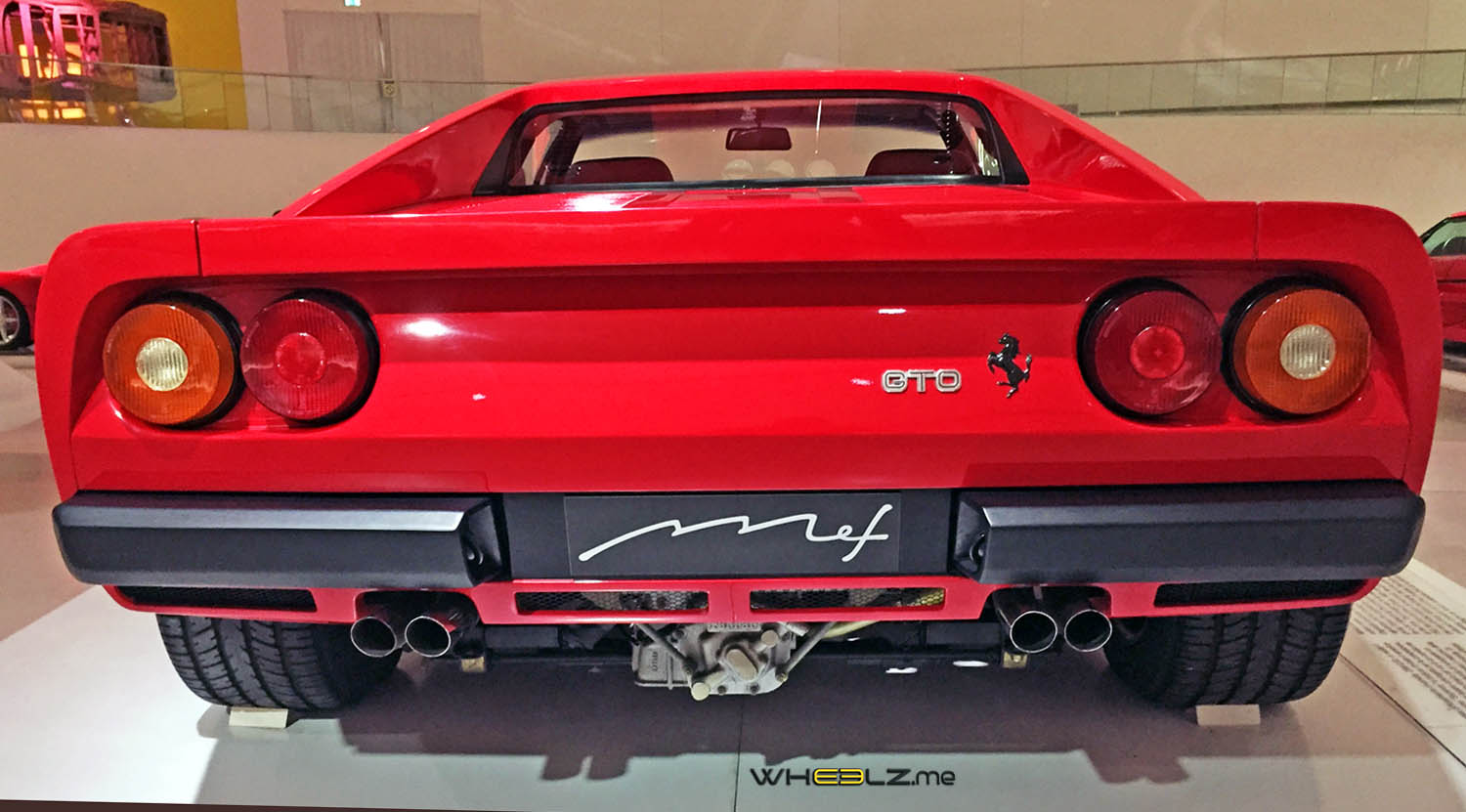 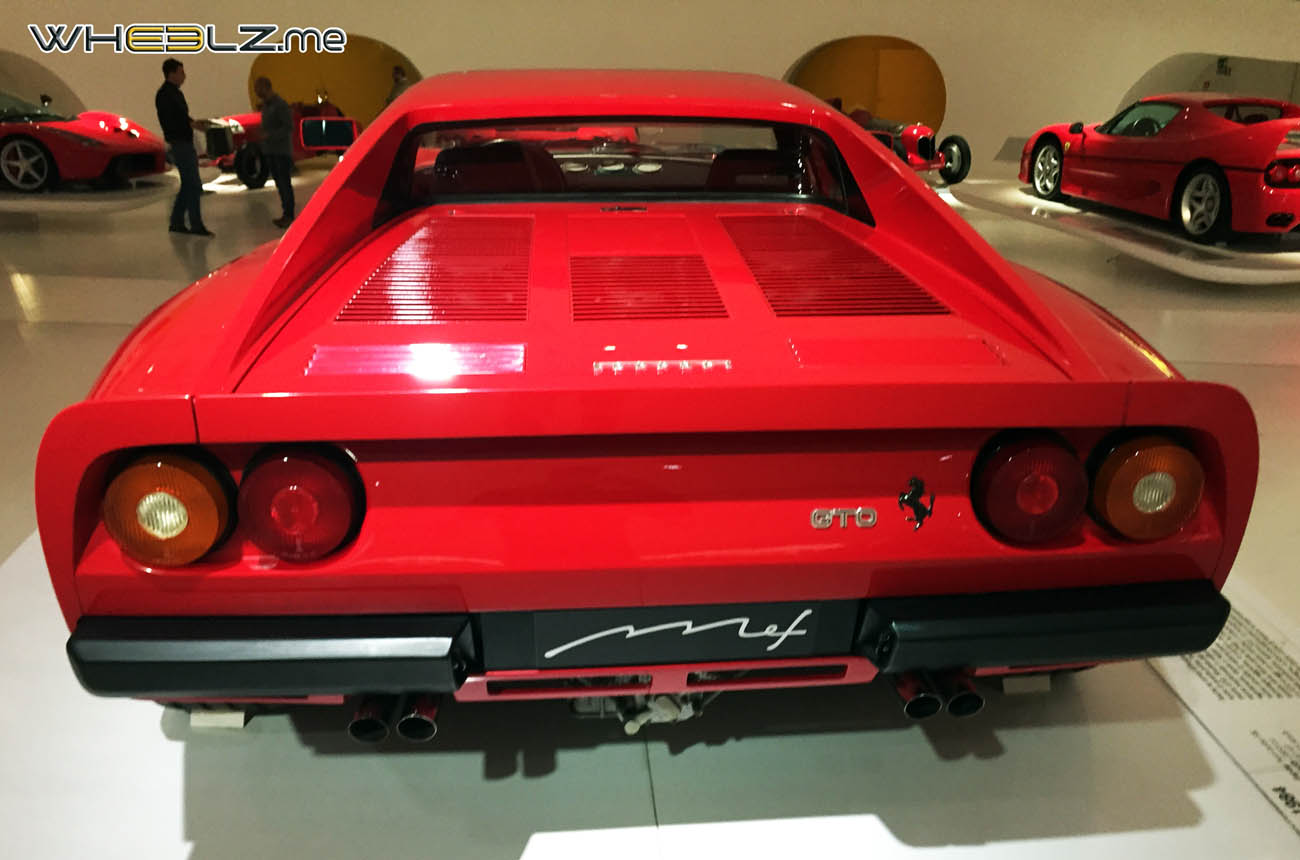 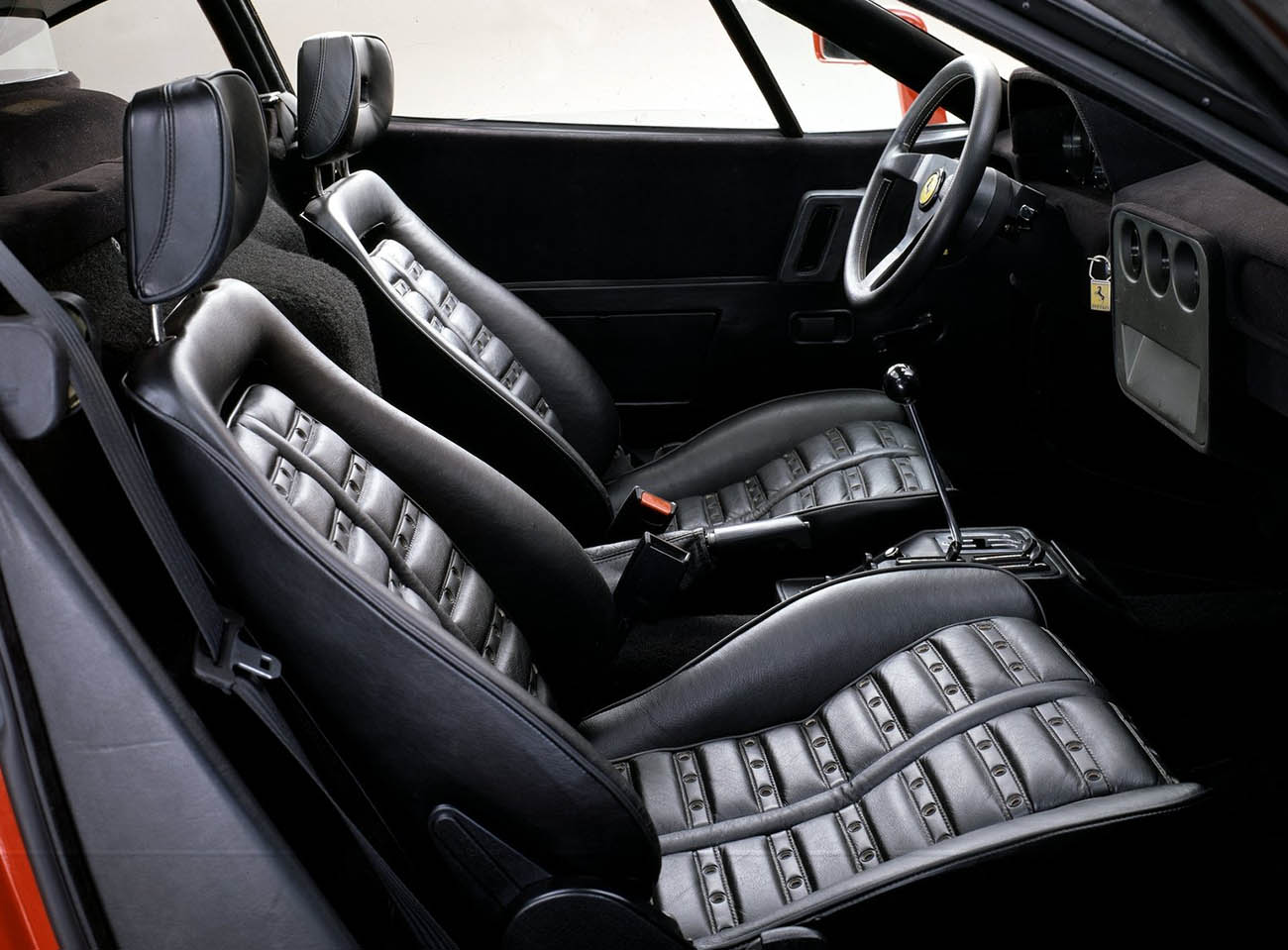 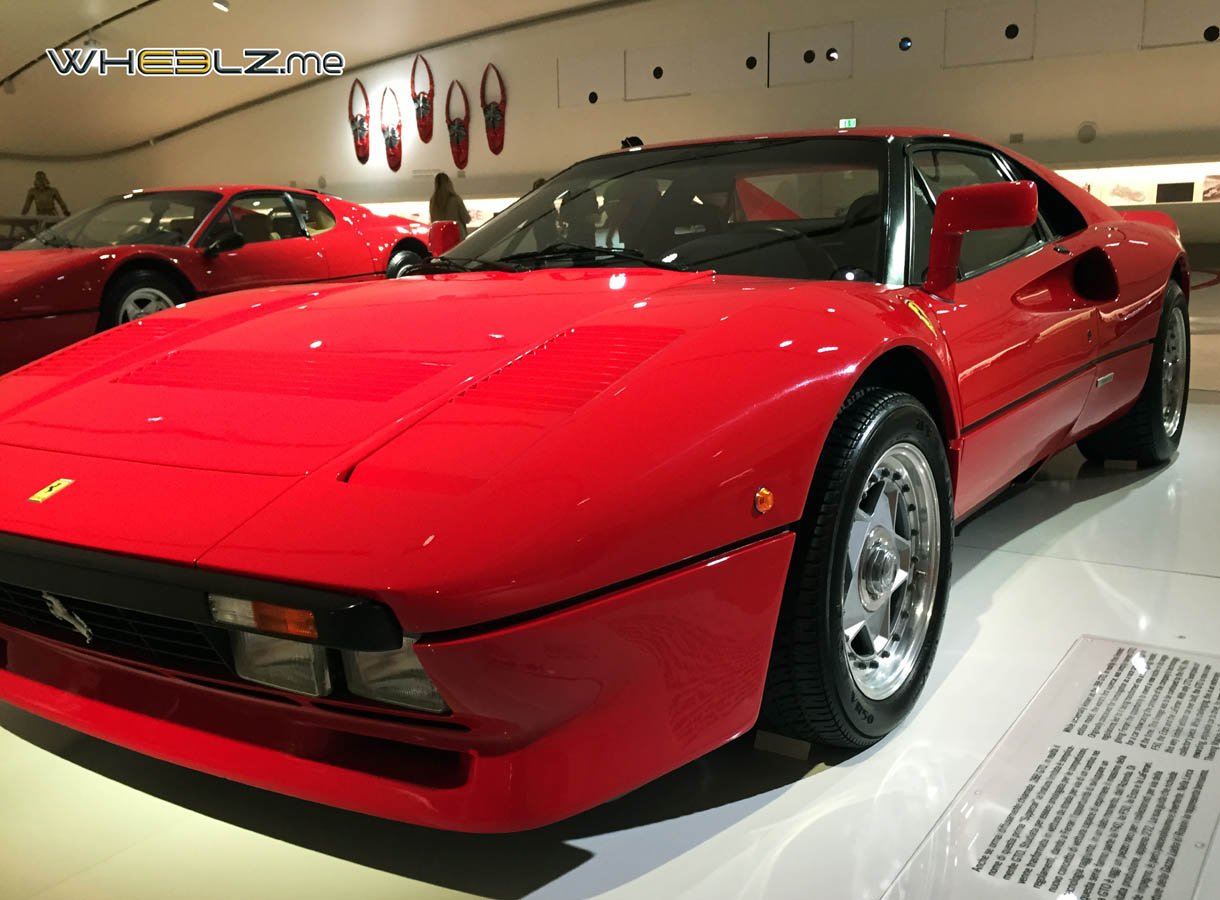 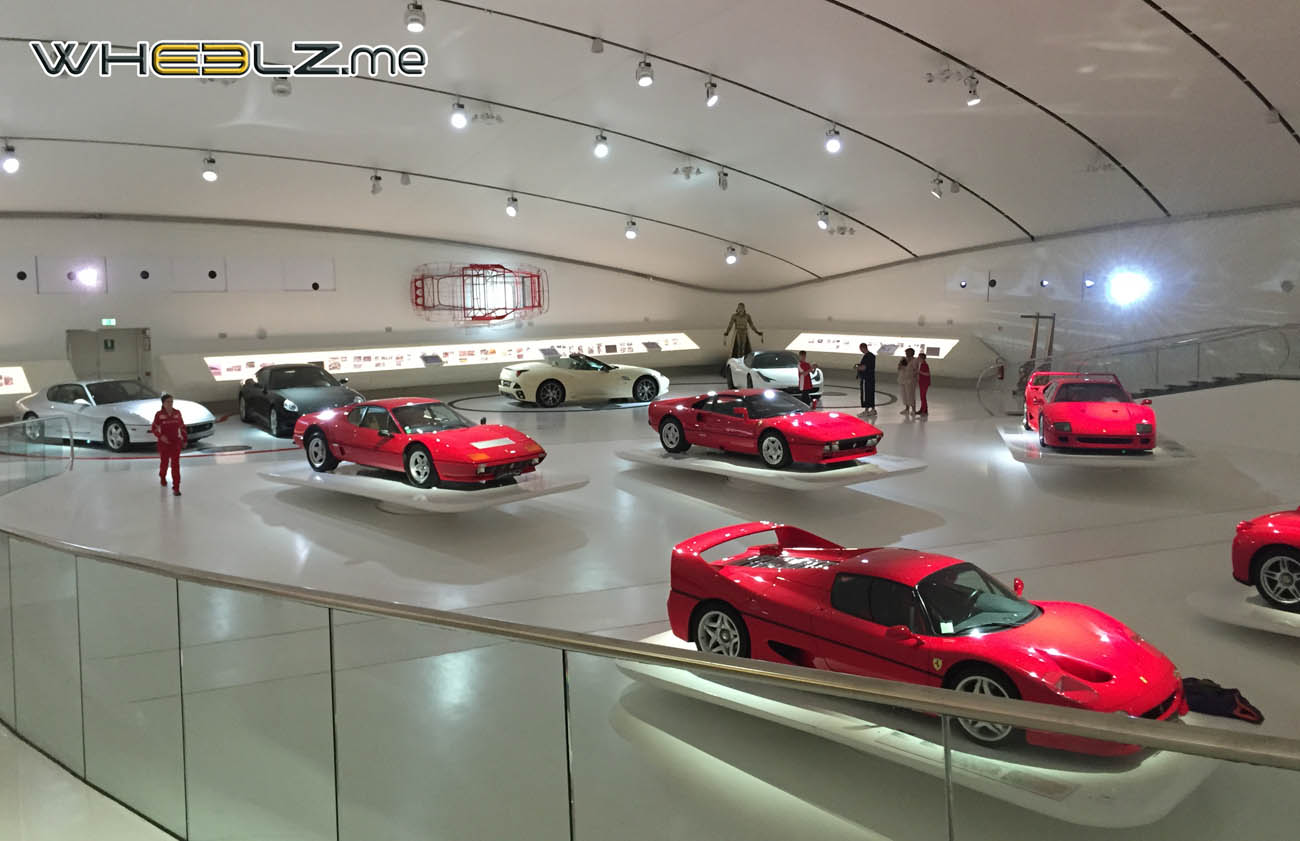 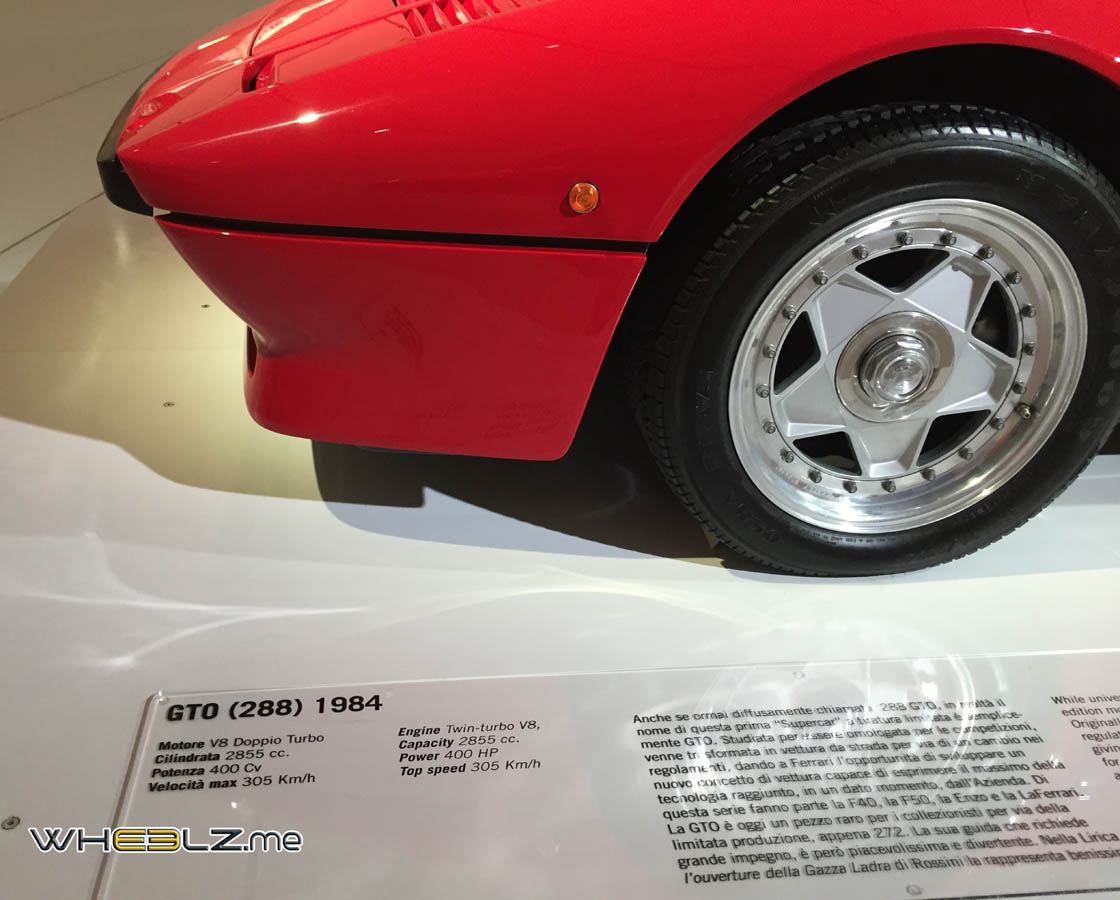 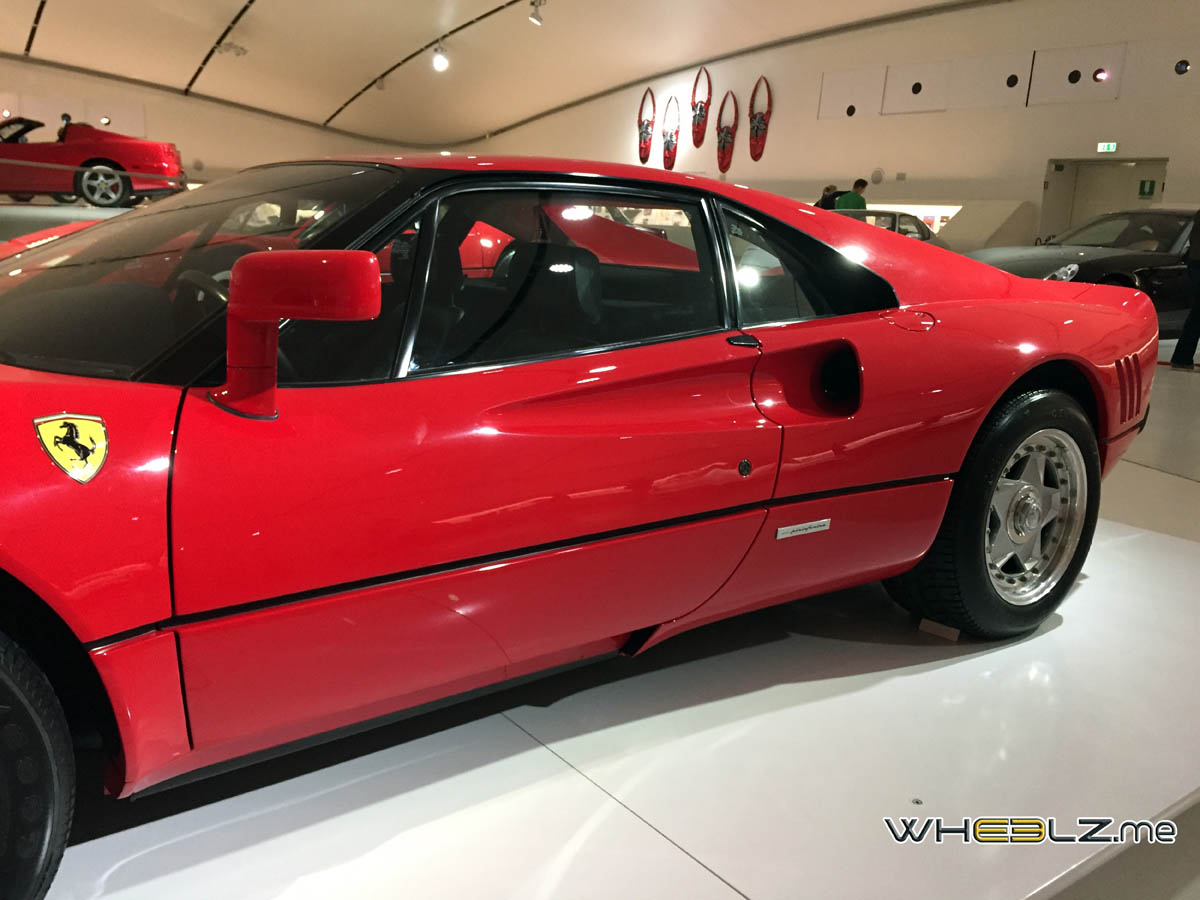 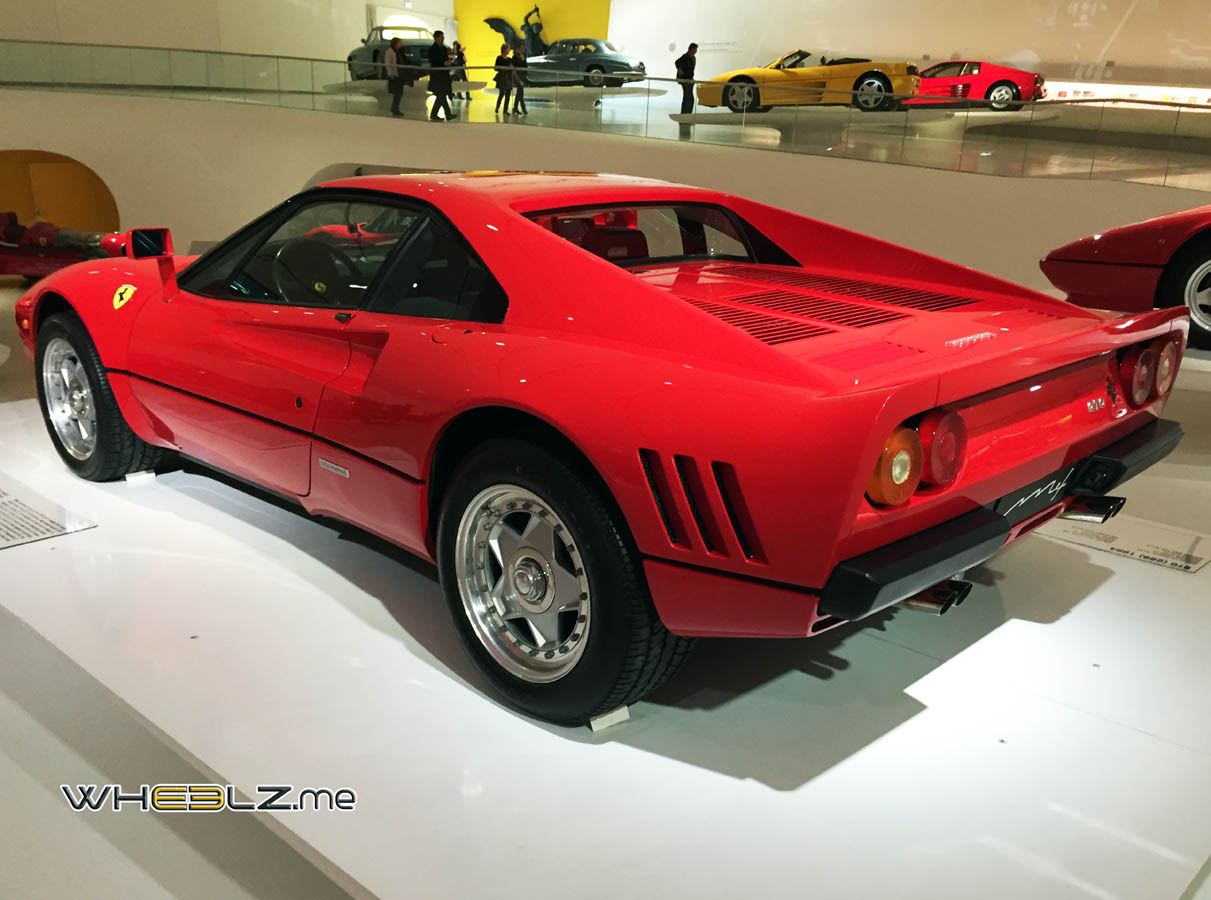